Want Viagra? A New Kentucky Bill Says You Must Be Married and Have Your Wife’s Permission February 16, 2016 Rachel Ford

Want Viagra? A New Kentucky Bill Says You Must Be Married and Have Your Wife’s Permission

Kentucky Democratic lawmaker Mary Lou Marzian is tired of her colleagues passing laws restricting women’s healthcare. So when the legislature passed a bill requiring women to consult with a physician 24 hours prior to an abortion, Marzian proposed a bill of her own.

Instead of targeting women’s healthcare, though, she flipped the script on her male colleagues. 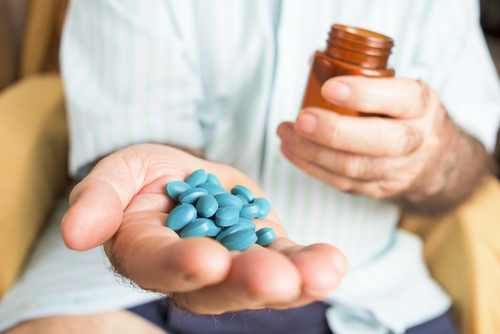 According to the proposed bill,

… men would have to navigate a series of obstacles before they could obtain erectile dysfunction drugs, like Viagra. Each man would be required to have two doctor visits, a signed-and-dated letter from his spouse providing consent and a sworn statement — delivered with his hand on a Bible — that he would use the drugs only to have sex with his spouse.

Only married men would be eligible for the drugs.

Unlike her colleagues, however, Marzian isn’t actually interested in limiting men’s reproductive options. The bill is merely meant to demonstrate how absurd it is for lawmakers to be dictating these choices.

“My point is to illustrate how intrusive and ridiculous it is for elected officials to be inserting themselves into private and personal medical decisions,” Marzian said by telephone.

It’s additionally intended to highlight the hypocrisy of the government-small-enough-to-fit-in-a-uterus that conservatives promote:

Her erectile dysfunction bill, she said, was meant to highlight what she saw as hypocrisy from politicians. In past debates — a smoking ban that was defeated and a booster seat requirement that passed, for instance — her political opponents spoke against government intervention in private lives, she said. The requirement that only married men could receive the drugs was aimed at politicians’ stated focus on family values, she added.

In hopes of landing her message, she chose a subject she thought would get men’s attention. About 80 percent of the House is male.

“I have found that men are very touchy about their sexual lives, and they think that is very personal,” she said. “So I wanted to hit a chord that men could understand how it feels to have a politician say, ‘Well, you really don’t know enough; you really need some education about this because you just don’t know enough about your body; and we need to insert ourselves into your private life.’”

While she hopes to make a point, she naturally does not expect the law to go anywhere. Because while enforcing (the conservative version of) Biblical doctrine regarding reproductive healthcare and sex is a top priority for so many lawmakers, somehow enforcing those ideals with regards to men never makes the list.

It’s almost like the focus on birth control and abortion isn’t about what Jesus wants at all, but about controlling women’s sexuality. Who knew?

(Image via Shutterstock. Thanks to Peter for the link)

February 16, 2016
9 Basic Bible Facts That Atheists Should Know
Next Post