The Universe is Out to Get Us February 16, 2016 Hemant Mehta

The Universe is Out to Get Us

It turns out the end really is near. And the apocalypse has perfectly natural explanations.

Phil Torres has just released a new book all about our “evolving existential predicament” and how belief in religion is drawing us closer to our own extinction. It’s called The End: What Science and Religion Tell Us about the Apocalypse (Pitchstone Publishing, 2015): 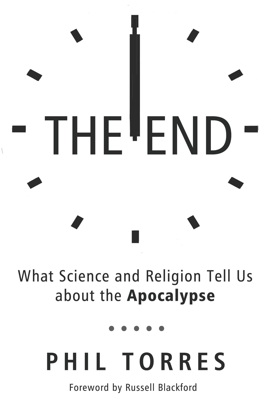 In the excerpt below, Torres explains how our universe is out to get us:

If, by some combination of concerted effort and pure dumb luck, our species manages to survive into the distant future, there are a number of natural events associated with the aging of our Earth, sun, and universe that will pose a succession of existential risks. Indeed, if one were to define existential risks as “causing the extinction of our species,” as the Centre for the Study of Existential Risks does, then biological evolution itself would constitute an existential risk. This brings us to the really big picture of life. The following offers a snapshot of what we can expect from the universe, zooming from the local to the cosmic.

In the near future, it “appears unstoppable” that a portion of the continental ice sheet making up Antarctica, namely the Amundsen Sea region of the Western Antarctic Ice Sheet, will be lost. This could happen sooner than previously thought, and in fact recent “findings add to a growing body of evidence suggesting that the effects of climate change are outpacing scientific predictions.” If this region were to melt, it would be significant, since it “contains enough ice to raise global sea levels by 4 feet.” By comparison, the Intergovernmental Panel on Climate Change (IPCC) projects a sea level rise of 1 to 3 feet by 2100, but this estimate doesn’t take into consideration the possibility of the Amundsen Sea region crashing into the ocean. More generally, if the entire West Antarctic Ice Sheet were to melt, it “would raise [the] global sea level by about 16 feet,” according to NASA. To put this in perspective, a sea level rise of 12 feet would result in the permanent flooding of 98% of New Orleans, 97% of Atlantic City, 73% of Miami, 22% of New York City, and 24% of Boston. This is an effect of short-term climate change that we can expect within the foreseeable future.

The longer-term climatic changes will likely overcome the more immediate effects of industrial activity. We find ourselves in the midst of the quaternary glaciation period, in a momentary warm spell called the Holocene interglacial period. Due to changes in properties of Earth like its “axial tilt” (i.e., the degree to which Earth’s axis is tilted relative to its orbital plane) and its “orbital eccentricity” (i.e., the degree to which Earth’s orbit is an oval rather than a circle), we should expect the climate to begin cooling “any millennium now,” with this temperature drop reaching its pinnacle in about 80,000 years. (Note that within the last 1 million years, cold spells have been the norm. Our current warm period is very much the exception.) But the anthropogenic, nonnatural phenomenon of climate change could push the next ice age back by thousands of years.

Another cause of environmental change, in the long term, will result from the reorganization of the continents. We know that the crust and upper mantle of Earth is sectioned into various tectonic plates, which can move around and collide with each other. About 300 million years ago, all the continents were contiguous—rather than separated by water — forming a supercontinent called Pangaea. This gradually fragmented into two large continents called Laurasia and Gondwanaland. Laurasia became North America, Europe, and Asia, while Gondwanaland became Antarctica, South America, Africa, and Australia. The creation and then separation of supercontinents is a cyclical phenomenon, which means that we can expect another supercontinent to form in the future. Right now, North America is drifting away from Europe at a rate of about 1 inch per year (perhaps a little slower than your fingernails grow). According to one study by the geologist Christopher Scotese, the Mediterranean Sea will vanish in 50 million years as Africa collides with Europe, with a new mountain range in its place as “more and more of the plate [gets] crumpled and… pushed higher and higher up, like the Himalayas.” Furthermore, the Atlantic Ocean will have gotten larger, and Australia will have shifted north. In about 250 million years from now, a supercontinent will have formed called Pangaea Proxima (formerly, Pangaea Ultima). Simply by chance, this is roughly the same increment of time it takes the solar system to complete a full orbit around the center of the galaxy.

As a result of such geographical alterations, the environments in which our distant descendants (if still on Earth, under a sky full of unrecognizable constellations) live may be radically different from that in which we currently live. New mountain ranges, ocean borders, sea levels, and so on will open up a vast number of new niches for organisms to occupy. Since changes in the environment offer new evolutionary opportunities, we can expect the flora and fauna of the future to be quite different than they are today. If we don’t take over our own evolution—as we are now doing, turning ourselves into cyborgs—we can expect natural selection to significantly modify our bodies and brains, resulting in creatures that may be as different from us as we are from the cynodonts, a group of animals that lived roughly 260 million years ago and spawned the modern mammal.

Furthermore, the rotational speed of the earth is slowing down, meaning that the days were shorter for the dinosaurs and will be longer for our progeny. According to one calculation, the day was curtailed by more than an hour some 350 million years ago, and might have been 21.9 hours long 620 million years ago. (Interestingly, the earth’s rotation is actually speeding up right now, as a result of certain geological phenomena. But this is a temporary trend that will be reversed in the long run.) While Earth spins more slowly (as has already happened to the moon), its axial tilt will undergo changes as well. A paper in Astronomy and Astrophysics calculates that in 1.5 to 4.5 billion years, the axial tilt of the earth could reach as high as 89.5 degrees (relative to its orbital plane). The authors conclude that “a very large [axial tilt] in the future of the Earth is a highly probable event.” This is significant because it would severely disrupt the seasons, which current life depends upon for survival. Life as we know it could be threatened.

About 2 billion years from now, the Milky Way galaxy (of which our sun is one of 300 billion stars) will begin to collide with the nearest galaxy to us: the Andromeda galaxy. This system, containing about 1 trillion stars, was slightly more than 4 million light-years away when the earth formed about 4.5 billion years ago. Today it’s only about 2.5 million light-years away—and quickly approaching. Although this collision won’t result in a catastrophic display of celestial fireworks, given how far apart planets and stars are, these galaxies will “eventually settle down into a gigantic swarm of stars buzzing around a common center of gravity,” resulting in what T. J. Cox and Abraham Loeb, of the Harvard-Smithsonian Center for Astrophysics, call the Milkomeda galaxy. Both galaxies have supermassive black holes at their centers, and after their merger these black holes may “flare up, becoming active galactic nuclei, feasting on the torrent of new material that was unlucky to enter their feeding zones.” It appears as though Earth might be safe from this threat, though, since it may be pushed some 100,000 light-years from Milkomeda’s center, into an area safe from the black holes.

While Earth slows down and the Milky Way collides with Andromeda, the sun will enter into the later parts of its life cycle. Like every other star in the universe, it will exhaust its reservoir of nuclear fuel, eventually turning into a cold, dark remnant. Before this happens, though, it will become increasingly luminous. So luminous, in fact, that Earth’s surface will rise into the hundreds — even up to ~3,000 degrees Fahrenheit. As the paleontologist Peter Ward and astronomer Donald Brownlee note in their book The Life and Death of Planet Earth, “As global temperatures approach, and then exceed… 104 degrees F, the planet will begin to die at the equator, and multicellular life will have to migrate poleward.” Later, as the average temperature approaches 122 degrees, “wholesale extinction will be taking place on land.” At 140 degrees, “the land world will begin to resemble what it once was a billion years ago, before the first animals and plants had evolved.” This extinction trend will peak when global temperatures reach 160 degrees: “Except for bacteria, life will have been extinguished.” While this occurs, the intense solar heat will also cause the oceans to evaporate into space, leaving behind a desolate, sizzling desert.11 This will probably happen within the next few billion years.

As the sun continues to age, it will gradually encroach into the solar system, becoming a hugely bloated body intruding on the space of its satellites. Eventually, it will grow so large that it will cover more than half the open sky above us. After consuming the first two rocky planets, Mercury and Venus, our planet will be next on the menu. According to recent calculations by the astronomers Klaus-Peter Schroeder and Robert Smith, this could happen some 7.59 billion years from now.13 While there’s a chance that our planet could escape the sun’s gravitational pull, since its mass (and therefore gravitational tug) will decrease as it expands, tidal forces between the sun and Earth “will try to drag the planet inward and downward,” thereby foiling its escape plan.14 In the end, the sun will morph into an engorged red giant, about 256 times as wide as it currently is and 2,730 times as bright.15 After this, it will become a stellar remnant called a white dwarf, and later a black dwarf that will simply disappear into the dark canopy that forms the backdrop of the universe.

So, big changes await us in the future, as a result of melting ice sheets, natural cycles in Earth’s rotation and orbit, continental drift, the slowing down of Earth’s rotational speed, changes in Earth’s axial tilt, the sun becoming more luminous, and the sun eventually swallowing up the earth. As we’ll discuss more in chapter 14, the ultimate strategy for survival in such a universe — one ruled by a dictatorship of entropy — will be to colonize the cosmos.

The End is now available on Amazon.

February 16, 2016
The Two Largest Producers of Atheist Audiobooks Have Merged
Next Post

February 16, 2016 Tickets Now Available for Connecticut Atheist Conference
Browse Our Archives
What Are Your Thoughts?leave a comment