The Pledge of Allegiance Is Well Past Its Expiration Date February 16, 2016 Hemant Mehta

The Pledge of Allegiance Is Well Past Its Expiration Date

At Salon, the American Humanist Association’s David Niose has a wonderful article about why the Pledge of Allegiance is a bad ritual not only for the “Under God” bit, but also because it’s contrary to the very ideals our country claims to hold so dear: 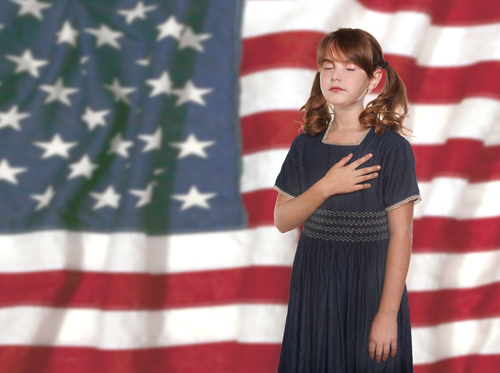 Dealing with schools mistreating pledge dissenters is like a tour of duty in the culture wars, a visit to the trenches to see the other side at its ugliest. One discovers that critical thinking is the last thing that many teachers and administrators really want from their kids, who are expected to line up like lemmings each day for 13 years and vocally affirm the Establishment position of national greatness. With such an educational environment, is it any wonder that over half the population in 2003 wanted to rush to war in Iraq, believing Saddam Hussein was behind the Sept. 11 attacks?

Such unhealthy nationalism is cultivated when an entire population is encouraged to participate in easy symbolic gestures that validate national greatness. Anyone can stand and pledge allegiance and anyone can slap a magnet on their SUV to “support the troops,” but not anyone can learn the history that underlies today’s international situation and carefully assess policy options. Surely we need less pledging and more learning.

He’s absolutely right. If a Middle Eastern nation told schoolchildren they were supposed to Pledge allegiance to the country despite the problems caused by its leaders, we’d call it brainwashing.

What we need now are more teachers and administrators who have their students’ backs when they remained seated.

February 16, 2016
Ted Cruz Surrogate: "Separation of Church and State is a Myth"
Next Post