An Open Letter to Marco Rubio on the Difficulty of Instilling Values February 16, 2016 Lauren Nelson

You and I agree on basically nothing. I won’t pretend we do. I won’t pretend I didn’t get a chuckle out of your robotic glitching during the New Hampshire debate and the subsequent mocking. 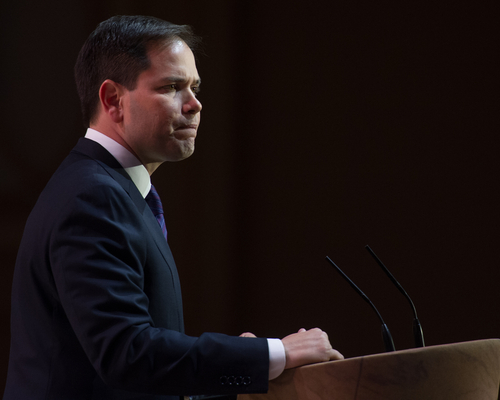 I won’t pretend I didn’t giggle when you did it again at an event days later as you insisted:

In the 21st century, it’s becoming harder than ever to instill in your children the values they teach in our homes and in our church instead of the values that they try to ram down our throats in the movies, in music, in popular culture.

Seriously, buddy. You need to grow a personality. Or hire a better speech coach. Something.

But it wasn’t just the zombie-like repetition that had me laughing. It was the substance of the comment you were repeating that really got me going.

In that speech, like so many others, you lament how difficult it is to teach your children certain values and make them stick. You decry culture for getting in the way. And you say all that like getting elected will make it easier to overcome such influences.

While your election or the election of any of the other religious zealots crowding the Republican field would most certainly damage the separation of Church and State established when this nation was founded, it would do absolutely nothing to make it easier for you or any other parent to radicalize your children. It is not the rise of progressive, “godless” politicians that is making your job harder in this respect. It is the rise of science, technology, and general knowledge that is making it more difficult to convince autonomous human beings to shape their worldview according to myths propagated in an ancient, poorly translated text with little relevance in modern society.

You have every right to teach your children to embrace supremacist notions, discriminate against marginalized populations, and believe in an imaginary friend. Go for it. But I have every right to call you out for promoting hate and ignorance, and to explain as much to my child, who may or may not have a conversation with yours about the nonsense Daddy Dearest is spouting, regardless of whether or not you’re in the White House.

That’s the thing, Senator. No amount of proselytizing will change the reality in which your children live. You can pound on the bully pulpit all you want. That will not make gay people go away. That will not make women eagerly surrender power over their uterus to you. That will not make scientists suddenly endorse creationism with unbridled fervor. And unless you plan on keeping your kids in a Kimmy Schmidt-style bunker, that will not prevent your children from being exposed to a diverse world of people and experiences. It will not shield them from opinions more informed than your own.

No, secular public policy is not your problem. It is not preventing you from raising your children in the manner you choose. Your problem is that the way you are raising them sharply deviates from the life experiences they will have. You can tell them gay people are moral deviants, just like I can tell my child the sky is green. Neither statement is true, and in this day and age, both assertions are going to be met with some strong opposition in short order. Your election will not change that.

If you seriously think it will, you’re a funnier man than I thought… and more than a little delusional. I’d wish you good luck with that, but even atheists know that lying is wrong.

A Voter Who Knows Better

February 16, 2016
Want Viagra? A New Kentucky Bill Says You Must Be Married and Have Your Wife’s Permission
Next Post

February 16, 2016 Bible-Thumping Boxing Champ Manny Pacquiao Compares Gay People to Animals
Browse Our Archives
What Are Your Thoughts?leave a comment