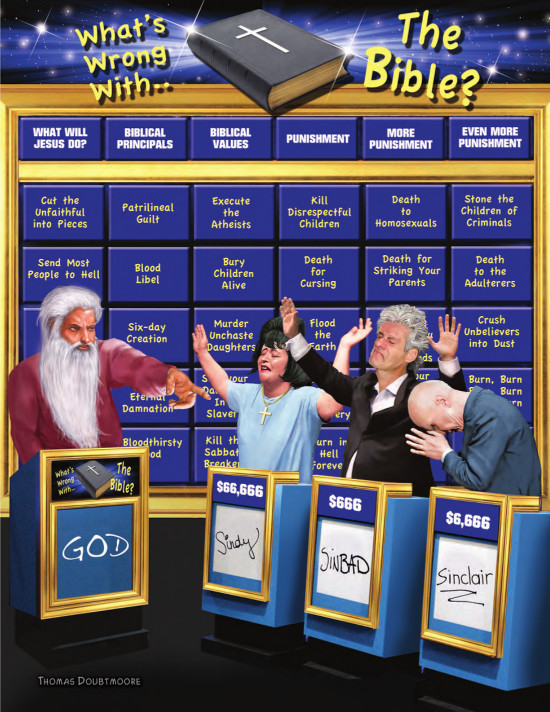 Three favorite expressions that saturate the pious language of Christian fundamentalists are “biblical values,” “biblical principles,” and “biblical worldview.” For example, the stridently anti-marriage-equality restaurant chain Chick-fil-A asserts that their operation is based on Biblical values because they condemn birth control, divorce, and same-sex marriage — plus they’re closed on Sundays. Similarly, Dave Ramsey’s franchised Financial Peace University purports to be a “biblically-based curriculum that teaches people how to handle money God’s way.”

Thousands of other so-called Christian businesses derive their values, principles, and world-views from a highly selective and thoroughly misleading reading of scripture, disregarding all of the terrible material that predominates in holy writ. One common theme stresses the “biblical three Rs”: repentance, redemption, and reconciliation. But the true overarching theme is actually punishment, punishment, punishment.

To be effective defenders of the secular perspective, Atheists must be prepared to attack the Christian perspective at its point of greatest vulnerability, which is the Bible itself. Rather than just playing defense against the endless assaults by fundamentalist zealots, it is essential to go on the offense, armed with knowledge about the errors, terrors, and contradictions that permeate “God’s word.”

This article summarizes nine categories of basic facts that should be useful to Atheists who find themselves entangled in Bible discussions. Of course, there is no substitute for actually reading the so-called “good book,” which is exactly what many Christians do not do. “Good book” is a monstrous misnomer for this detestable compilation of holy horrors. These nine categories are roughly ordered chronologically, from the beginning to the end of the scriptural story.

Nephilim and the Noachian Deluge

The Bible’s preeminent massacre is the Noachian Deluge, or the Great Flood, outlined in Genesis Chapters 6, 7, and 8, where God drowned everyone except eight people in a monumental, worldwide flood. God’s motivation was the wickedness and depravity of humankind, but he also did it for a reason that’s hardly ever acknowledged: the cross-breeding of human women with divine beings from the spirit world. These unions produced giant mutant offspring called Nephilim (Genesis 6:4) who were up to ten feet tall (Deuteronomy 3:11).

In the Hebrew (Old) Testament, the most serious violation is that of worshiping heathen gods or idols, which is reiterated a total of 332 times. This unforgivable misbehavior requires the death penalty, which is repeated more than eighty times though explicit decree, murderous action, or threatened elimination. Because god’s severe punishments are inflicted tirelessly on his incorrigible children, it can be concluded that Hebrew history developed to a great extent around the first of the Ten Commandments: “Thou shalt have no other gods before me.” In other words, God conducted universal jihad against infidels in a manner no different from that of the Islamic State. Deuteronomy 13 is a concise statement: family members who recommend worshiping other gods must be executed, and all residents of a town where leaders encourage worship of other gods must be killed and everything burned. This will satisfy god’s fierce anger, and he will have mercy and compassion for those adherents who undertook the murderous action in his name.

How is this any different than Sharia law? Maybe the advocates of official bans on Sharia in the U.S. (already approved in eight states and all irrelevant as well as unconstitutional) should also propose Biblical law bans, which should be supported by Atheists under the guise of an equal protection argument.

The Hebrew Testament reports events that are simply unbelievable because of the impossibly large numbers involved or the incredible nature of the episodes described. Well known examples are the six-day creation, the worldwide flood, and the parting of the Red Sea. These events obviously did not occur for the reason that they contradict everything we know today about the natural world. Here are some other examples: a half million Israelite troops were slaughtered in a single day (2 Chronicles 13:15–17); 22,000 oxen and 120,000 sheep and goats were sacrificed to god (1 Kings 8:62–63); 1,160,000 troops were garrisoned in Jerusalem (2 Chronicles 17:13–19); 675,000 sheep, 72,000 oxen, 61,000 donkeys, and 32,000 young girls were taken as booty after the massacre of the Midianites (Numbers 31:31–35).

The temple constructed under King Solomon was far too large and opulent to have been built in one person’s lifetime (2 Chronicles 3–9). Speaking of unrealistic longevity, seven patriarchs lived longer than 900 years and another two dozen lived between 120 and 895 years (Genesis 5, Genesis 8, and other books). Samson killed one thousand Philistines with a donkey’s jawbone (Judges 15:15), Elijah ascended into heaven on a whirlwind (2 Kings 3:11), Joshua prayed for the sun and moon to stand still and they did (Joshua 10:12–14), and Jonah was swallowed by a great fish and was coughed up alive on the beach three days later (Jonah 1:15–17, 2:10). These and many other episodes could not possibly have happened and, moreover, their recitation as divinely inspired truth casts doubt on the credibility of all other remarkable Bible claims.

Perhaps no biblical contradiction is more difficult to comprehend than god’s refusal to frame a consistent policy concerning the punishment of children for the sins of their parents. On one hand is god’s policy that punishment for sin continues from parents to their descendants (Exodus 20:5; 2 Samuel 12:13–18; 1 Kings 13:34, 14:10, 21:25–29; 2 Kings 5:27). Directly contravening this principle, on the other hand, god declared that children should not be punished for the sins of their fathers and that all people must pay the penalty for their own sins (Deuteronomy 24:6; 2 Kings 14:6; 2 Chronicles 25:4; Jeremiah 31:29–30; Ezekiel 18:2–4).

Three gruesome examples illustrate god’s preferred policy. Achan’s children were stoned to death along with him (Joshua 7:13–26), the children of three disobedient men were buried alive with their fathers (Numbers 16:25–34), and when Daniel’s false accusers were eaten alive by lions, so were their children (Daniel 6:24).

Redemption and the Blood Sacrifice

The Hebrew Testament contains twenty chapters in four books that specify, in exacting detail, how animals are to be sacrificed to the glory of god. The sacrificial animals (oxen, sheep, goats, turtledoves, and pigeons) are killed and their blood is sprinkled or smeared on the altar, then the carcasses are burned. While the typical ritual sacrifice involves a few dozen animals, some require the killing of thousands or even tens of thousands animals, and god derived great pleasure and enjoyment from these barbaric sacrifices.

The sacrament of holy communion is really just vicarious cannibalism: “Whoever eats my flesh and drinks my blood has eternal life, and I will raise them up at the last day” (John 6:54). God sure has a bloodthirsty disposition.

The Bible requires the death penalty for sixty specified crimes, including worshipping or sacrificing to heathen gods; worshiping idols; worshiping the sun, moon, or stars; consulting mediums, soothsayers, or astrologers; cursing god; Sabbath-breaking; adultery; murder; kidnapping; stealing; homosexuality; perjury; striking one’s parents; rebelling against one’s parents; unchasteness (if you’re a daughter); prostitution (if you’re a priest’s daughter); proclaiming false prophecy; and having sexual relations with both a woman and her mother (all three must be burned alive).

Jesus generally endorsed Mosaic Law, and he specifically supported the death penalty for the sin of cursing one’s parents (Matthew 15:4; Mark 7:10). Paul supported capital punishment for a variety of violations, including ungodliness or non-belief. He referred to the irreligious as God-haters (Romans 1:26–32, 1 Timothy 1:8–11). While Atheism certainly constitutes disobedience or blasphemy in the Hebrew Testament, it’s not until Paul’s declaration in the Christian Testament that it’s named as a capital crime.

Most people don’t know that god requires the death penalty for violations of the first nine of the Ten Commandments (Exodus 20:1–17). Opponents of Ten Commandments displays on public property should stop quarreling with the fundamentalists and instead adopt the strategy of demanding that the mandated penalties for violators be listed prominently alongside the commandments themselves. How is it not blasphemy to list them without naming god’s ordained punishments? After all, such selective citing of biblical text willfully disrespects the sacred integrity of god’s holy word.

Biblical Bigotry and the Blood Libel

The Christian Testament is absolutely clear about the question of who killed Jesus. In Acts 2 through 10, Peter stated repeatedly the same thing that Stephen (Acts 7:52) and Paul (Thessalonians 2:14–15) also said: the Jews killed Jesus. This allegation is consistent with what the Jews said about themselves: “His blood be on us and on our children” (Matthew 27:25). Known as the blood libel, this corporate acceptance of guilt has been regarded by some as biblical justification for anti-Jewish bigotry today. Fortunately, the collective blame on all Jews was lifted—at least from Catholic doctrine — in 1965. More recently, Pope Benedict XVI reiterated the absolution in a 2011 book.

And what did Jesus have to say about Jews? “You are children of your father, the Devil” (John 8:44).

How can Jesus be the Prince of Peace (Isaiah 9:6) when he incorporated extreme violence into several of his stories? Jesus told his disciples that he will return unannounced and cut the unfaithful into pieces and send them to hell (Matthew 24:51, Luke 12:46). He also said that when he returns for the last judgement he will order the wicked people brought before him to be executed and he will crush unbelievers to dust and relegate them to hell (Luke 19:27, 20:9–18).

Jesus is also portrayed as a dedicated servant of the poor (Matthew 25:41–46, Luke 14:13–14). However, Jesus’ forceful command to help “the least of those among you” is totally contradicted by his support for right-wing economic ethics: “To those who have much, more will be given; from those who have little, even that will be taken away” (Matthew 13:12, 25:29, Mark 4:25, Luke 19:26). Is this the proof we need that the Bible really is Donald Trump’s favorite book?

The Gospel makes it perfectly clear that Jesus was thoroughly obsessed with hell, a concept that he invoked in seventy-three verses. In three definitive statements, he said that the vast majority of humankind will go to hell (Matthew 7:13–14, 22:14, Luke 13:23–24). This pessimistic declaration is justified because Jesus knew that very few people could satisfy his sixteen moral mandates.

There is no stronger evidence against the claim that the Bible is the inerrant word of god than the Bible itself. The most effective arguments against the false assertions of believers come straight out of holy writ.

Brian Bolton is a retired psychologist living in Georgetown, Texas. His contributions in psychological measurements, personality assessments, and the psychology of disability have been recognized by universities and psychological societies.

February 16, 2016
How Some West Virginia Businesses Are Responding to the State's "Religious Freedom" Bill
Next Post