It’s no surprise that Ted Cruz wants an ultra-conservative justice to replaced Antonin Scalia. What is surprising is how much he’s willing to lie about the consequences if that doesn’t happen. (Then again, maybe that’s not surprising at all.)

On Meet the Press yesterday, Cruz told host Chuck Todd that a liberal justice would mean the end of religious liberty — adding that religious symbols would be “sandblasted off of the tombstones of our fallen veterans”: 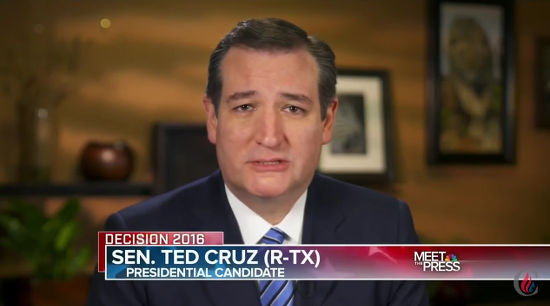 The comments came in response to a question about whether the Senate should go through the process of confirming or rejecting President Obama‘s eventual nominee:

Cruz: By the way, the Senate’s duty is to advise and consent. You know what? The Senate is advising right now. We’re advising that a lame-duck president in an election year is not going to be able to tip the balance of the Supreme Court.

That we’re going to have an election, and if liberals are so confident that the American people want unlimited abortion on demand, want religious liberty torn down, want the Second Amendment taken away, want veterans’ memorials torn down, want the crosses and stars of David sandblasted off of the tombstones of our fallen veterans, then go and make the case to the people.

I don’t think the American people want that…

If we ended up with a 5-4 liberal majority on the Court, religious liberty would be protected. No one wants to take that away. The difference is that people wouldn’t receive special treatment on account of their religion. The Kim Davises and Christian Bigot Bakers of the world would be rightfully punished for refusing to serve customers on the basis of their sexual orientation, just as everyone else would.

“Unlimited abortions on demand” is just a scary way of saying “access to healthcare for women who want it.” Cruz may want to force women to bear children against their own will, but the law says otherwise. He’s welcome to try and legislate a ban, though. Let’s see how well that goes over for Republicans in an election year.

The Second Amendment isn’t going away either. While I’d love to see a more common sense interpretation of it, it would take far more than five justices to nullify its power.

But that last bit about tearing down veterans’ memorials and “sandblasting” religious symbols off their tombstones is downright offensive. Whenever church/state separation battles have been fought over these memorials, the principle has been very straightforward: The government cannot support a monument honoring only Christians. Such memorials must be moved to private land or it must honor people of all (or no) religious backgrounds.

No one has ever suggested removing religious symbols from the tombstones at a place like Arlington National Cemetery.

Ted Cruz’s nightmare is nothing but a figment of his imagination.

And if he can’t come up with a compelling and honest reason to block a liberal justice, then there’s no reason for Republicans to throw a hissy fit over Obama doing his job.

February 15, 2016 Republicans Are Being Eaten Alive by a Monster of Their Own Creation
Browse Our Archives
What Are Your Thoughts?leave a comment