Republicans Are Being Eaten Alive by a Monster of Their Own Creation February 15, 2016 Lauren Nelson

In yet another Republican primary debate, the cast of clowns that pass for presidential candidates convened for a performance that more closely resembled a schoolyard Three Stooges routine on steroids than any form of civilized political discourse. It’s not that the hours-long collective temper tantrum was remarkable on its own; such a spectacle is par for the course at this point. What distinguished it from past debates, though, was that the candidates weren’t just raging at the wind this time. No, they’ve turned on each other in breathtaking fashion.

Donald Trump slammed Jeb Bush and former President George W. Bush, lumping them together as he ranted about the war in Iraq. Bush responded by saying that while Trump had been building a reality TV show, his brother had been building a security apparatus. Trump responded by sneering that 9/11 had taken place under W’s watch and that Bush’s mother should be running instead of him. 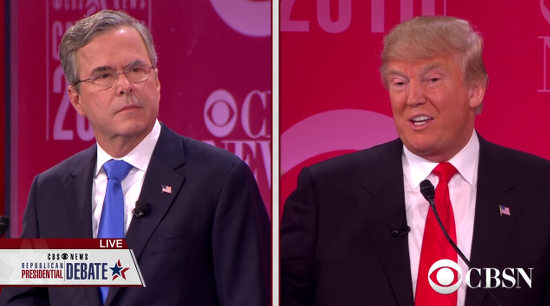 Marco Rubio jumped in to say former President Bill Clinton was to blame for 9/11 instead. Rubio and Ted Cruz went after each other about who could speak Spanish, prompting Cruz to actually say something in Spanish on the stage.

Trump went on to slam Cruz, repeatedly calling him a liar and insisting he was worse than Jeb.

John Kasich and Ben Carson begged for civility, but the shouting matches continued.

It was inevitable that the race would come to this. The mix has always been volatile, but the culling of the field over the past several weeks has left the most combustible elements to swirl and clash at high speeds. It’s not a good look for the Republican Party. As conservative pollster Frank Luntz put it:

If 10-year-old kids spoke to their teachers the way those candidates spoke to each other, those kids would be suspended. There is no way that any independent observer can say the Republicans gained a single vote against the Democrats because of last night. If you’re honest and unbiased, the GOP lost votes last night.

He’s right. In a race that has become incredibly personal for those involved, it’s all “yo mama” jokes and bloody knuckles and black eyes. The candidate that makes it through this gauntlet will be bruised and limping by the time he gets onstage with whoever wins the Democratic nomination. But that may not matter, because what we’re witnessing isn’t really about a primary anymore. It’s the debutante ball for a beast years in the making.

This is the culmination of a war that’s been roiling since the Reagan administration, when AIDs was a punchline and the mythical “welfare queen” was invoked in lieu of “poor, black voter.” Supercharged by the 2010 Tea Party wave, the transformation of the Republican party into a hyper-nationalist collective is complete. Republicans, once marketed as the small government, anti-tax, balanced-budget option for the business-minded voter, has morphed into a party that stands for a distorted and pungent version of conservative values. It’s not just anti-choice, anti-gun control, pro-death penalty values anymore. It’s also anti-poor, anti-immigrant, anti-same-sex-marriage, anti-black, anti-trans, anti-anyone-but-a-Christian. The party has become so seeped in fascism, racism, sexism, classism, and ableism that no amount of platitudes in stump speeches can disguise the vitriol anymore.

Reince Priebus & Co. had hoped that this election cycle would be the one that helped the party rehab its image. It had already had a taste of how out of hand things could get in the 2012 cycle and didn’t want a repeat. Instead, 2016 has laid bare the ugly transformation that’s been taking place largely in the shadows. When a Republican behaved badly over the past decade, party leadership and pundits would shrug it off as “not representative” of the party as a whole. But when the man who embodies all that is ugly within the party is the frontrunner in a presidential primary, when his bravado and poison are pushing the rest of the field in his direction, that deflection doesn’t work anymore.

The monster created by Republicans is off its leash, and there’s no regaining control now.

It would be one thing if the candidates eating each other alive over the course of a two-hour debate took place in a vacuum. But in reality, they’re just symptoms of the Republican zombie apocalypse taking place on the ground. Don’t just be scared of Trump. Be scared of the growing number of people who think Trump is a good candidate. Because while we’re busy laughing at the sideshow, those voters are busy trying to destroy what the country was supposed to stand for. Arm yourself with a ballot, because this is war.