Did you know Godless Secularists are taking over America?

It’s true. By my count, we’re inching ever-so-close to having one openly non-religious representative in Congress. Or the White House. Or the Supreme Court. Now that would be power!

But while Christians dominate every branch of everything, Franklin Graham told a Florida audience at his “Decision America” tour recently that they needed to defeat “secularism” in the 2016 election or else their religious rights would become an afterthought: 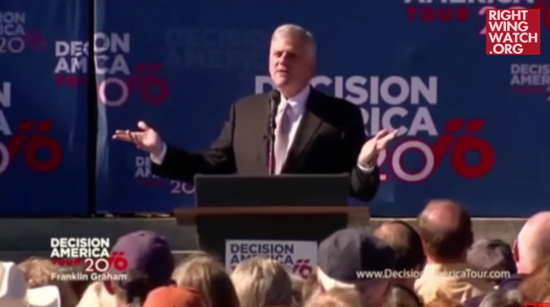 [After the fall of Communism,] secularism came and it infiltrated and it infected our governments. The state, the federal, the local levels.

Secularism and communism: there’s no difference. They’re both exactly the same. They’re both godless. And the Enemy came in and didn’t even have to fire a shot, and he’s already got control.

… They will strip our freedoms. Having a service like this, in a few years, could be illegal. They would say, “You can only have a prayer service inside of a church building.” That’s what the Communists do in Russia…

Your vote counts. America needs the Christian vote. You see, it’s not that the enemy is at the gate. They’ve come through the gate, because we’ve left the gates wide open, and we have allowed our moral walls to deteriorate and fall down.

Ladies and gentlemen, we’ve got maybe one election left. And I’ve been told by people who know that the game will be over. And I’m telling you right now, we’re very close to losing.

Let’s play a hypothetical game for a moment. Since Graham assumes his religious liberties will be stripped away with a Democratic victory this November, and all the power will be in the hands of the Godless, here’s a proposal: For every Christian leader in government come 2017, we swap them out for atheists. And for every atheist leader in government, we replace them with Christians.

Is that a deal Graham would take?

Of course not. Because he’s Lying for Jesus.

Christians have plenty of power. And they will continue to have plenty of power. If there’s a Godless person running for President, I don’t know who it is since even Bernie Sanders talks about the personal meaning of his Jewish faith. And if a Democrat wins, there’s no chance religious rights are going away, because church/state separation advocates want to protect those rights for everybody.

Gatherings like this one would absolutely be protected because it’s not a government event.

What Graham means to say is that there’s a chance Christians will one day be treated the same way as every other religion, instead of getting all the special perks they’re used to. That day is a long way away, to be sure, but the only things he’d be “losing” at that point are things he never should have had in the first place.

February 15, 2016
At Least They Didn't Edit This Out of the Book
Next Post

February 16, 2016 Seth Meyers Takes a Closer Look at the Fight Over Justice Scalia's Successor
Browse Our Archives
What Are Your Thoughts?leave a comment