Here’s a question every anti-gay bigot should be able to answer: Since you oppose marriage equality, how will legalizing it affect your life?

In the case of Australian Christian Lobby head Lyle Shelton, the answer is that people will assume he’s gay. Which is apparently an awful thing that can never, ever be corrected. 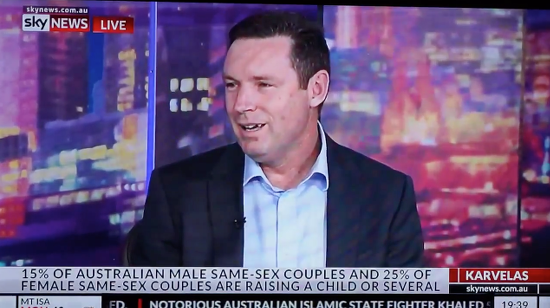 Besides the fact that being scared of a two-second conversation with a stranger is enough reason for him to oppose civil rights for an entire group of people, his premise is just flat-out wrong. The “default” will remain with the majority — people are much more likely to think gay people are straight than the other way around.

But consider this: Being temporarily thought of as gay is the worst consequence he can imagine if marriage equality is enacted.

Personally, I’d be more worried about my faith-based bigotry being exposed to the world. But that’s because I have a conscience.

Shelton’s response is all the more reason to make marriage equality a reality in the country. It won’t hurt anyone. His answer proves it.

February 15, 2016
The Religious Affiliations of Justice Scalia's Possible Replacements on the Supreme Court
Next Post