For some reason, the Chino Valley City Council in Arizona used to begin meetings with invocations delivered by elected officials (which the law doesn’t permit). So for a couple of weeks, while they decided on a legal alternative, the council members promised to skip the invocation during meetings.

That was what Rabbi Adele Plotkin needed to hear. She had no desire to listen to Christian prayers at government meetings.

But earlier this week, when she went to the meeting, she learned that Mayor Chris Marley (who is also a local pastor) would indeed be delivering a prayer, going back on his word. After he finished by invoking the name of Jesus, she protested what he said, and was soon led out of the chambers by a police officer: 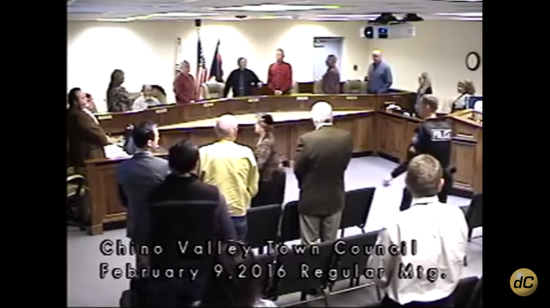 Plotkin said that appearing to approve of worshiping Jesus is considered idolatry in her faith. She said she has been in communication with representatives of the American Civil Liberties Union and they are interested in Chino Valley’s invocation policy.

After she left, the meeting took an even more disastrous turn. The officials discussed how to handle future invocations, looking at several different options… but they ultimately decided to stick with the status quo:

After discussing eight different options on how to handle the invocation at future Town Council meetings, the council voted that they would make no changes to the current tradition, which is a member of council gives the invocation without any guidance if they wish to be in the rotation to do so.

So let’s be clear about how prayers work in Chino Valley:

This is a lawsuit waiting to happen and Plotkin is making it very clear that she intends to take some action. Let’s hope she does, since this would be an easy victory.

February 13, 2016 This is the Man Who Created Ted Cruz
Browse Our Archives
What Are Your Thoughts?leave a comment