It’s bad enough that public universities have Christian chaplains for their football teams, but a high school in Florida is copying the illegal practice.

The Central Florida Fellowship of Christian Athletes even flaunted the partnership on Facebook: 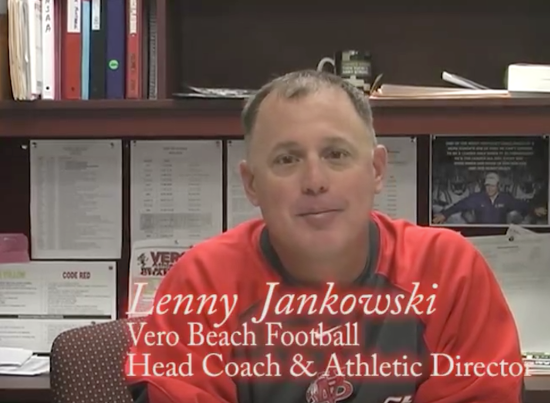 The Freedom From Religion Foundation explains the problems:

The video begins with a photo of Moore praying with the Vero Beach High football team while coaches, including Jankowski, join in. It then shows Moore leading a prayer at a game day prayer breakfast.

In the video, Jankowski talks about offering Moore a position at the school.

Moore “thought about it for 30 seconds or so and accepted the position, and really from there he has taken it and run so much farther than I ever imagined,” Jankowski says. “It has since turned into just an unbelievable deal; I mentioned about 43 sports teams, at all levels sub-varsity and varsity.”

The context indicates the position referenced in the video is likely football chaplain at Vero Beach High. Jankowski, also the athletic director for the school, suggests that Moore has access to the other sports teams. He states that Moore is considered full time, and the football team’s staff photos support this.

FFRF warned District officials of why this taxpayer-funded promotion of Christianity was a problem:

“Public school football teams cannot appoint or employ a chaplain, seek out a spiritual leader for the team or agree to have a volunteer team chaplain, because public schools may not advance or promote religion,” says FFRF Staff Attorney Andrew Seidel. “Furthermore, it is illegal for public school athletic coaches to lead or allow someone to lead their teams in prayer. The Supreme Court has continually struck down school-sponsored prayer in public schools.”

Obviously, the students are welcome to pray on their own, but the school has no business putting a pastor on staff. If these kids can’t function without a religious leader working with them, they should transfer to a private school.

February 13, 2016
Texas State Board of Education Candidate is a Creationist Who Thinks Obama Was a "Male Prostitute"
Next Post