When Michael Schumacher went to a DMV office in Wisconsin to get his driver’s license renewed, he wanted to wear a strainer on his head to honor the Flying Spaghetti Monster. 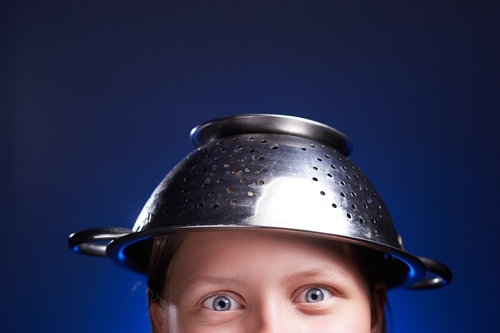 They told him no… so he got a lawyer involved.

The Wisconsin Department of Transportation has since responded. They admitted that since Michael was following all the rules (including getting a full facial photo), they cannot deny his request.

Wisconsin DMV Service Centers have been advised to recognize a colander as a religious head covering, if requested by one who claims it is part of a sincerely held religious belief, in accordance with the aforementioned administrative code. If your client encounters any additional difficulties regarding this process, please do not hesitate to contact me.

I guess we shouldn’t be surprised that, in a state where cheese heads are commonplace, colanders are accepted as religious headgear. Religious freedom FTW.

(via Church of the Flying Spaghetti Monster. Image via Shutterstock)