Ted Cruz Will Show the “Face Of The God That We Serve” to America, Says His Wife February 12, 2016 Rachel Ford

Ted Cruz Will Show the “Face Of The God That We Serve” to America, Says His Wife

Ted Cruz has made no secret of his religious fervor or political ambition during his campaign. His election to the presidency would be, to use his own words, “the Body of Christ ris[ing] up to pull us back from the abyss.”

The good news for Cruz is that it’s not just the Body of Christ that’s pulling for him. Apparently, he’s been chosen to represent the Face of God to the country, too.

And, no, it wasn’t Cruz channeling God’s divine intentions for him this time. It was his wife, Heidi.

She said as much in an interview with radio host Vince Coakley: 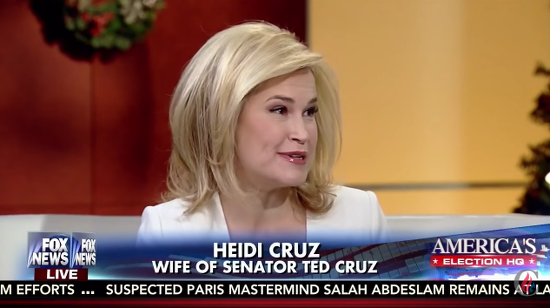 When I thought about doing it for our country, it became very clear to me that our family must be in this race. And it also became clear to me that we are at a cultural crossroads in our country and if we can be in this race to show this country the face of the God that we serve — this Christian God that we serve is the foundation of our country, our country was built on Judeo-Christian values, we are a nation of freedom of religion, but the God of Christianity is the God of freedom, of individual liberty, of choice and of consequence.

And I think that’s something that this country really needs to be reminded of, is that Christians are loving people, are nonjudgmental people, but there is right and wrong, we have a country of law and order, there are consequences to actions and we must all live peaceably in our own faiths under the Constitution. And Ted is uniquely able to deliver on that combination of the law and religion.

I wish I could say I was surprised by her use of “freedom of religion” while talking about imposing her religious beliefs on other people through the law… but that’s pretty much a staple of theocratic conservative belief these days. I’m not even surprised by the ease with which she conflates her husband with the “face of God.” Cruz himself has previously confused his own political machinations with some sort of divine purpose. His father has made similar comments in the past.

So is it really any wonder that Ted Cruz considers himself a Christian before an American? No. After all, his family’s version of Christianity is one that very happily anoints Ted as the Chosen One of our era; Ted’s ambitions are actually God’s ambitions, Ted’s political career is the realization of God’s plan for America. Cruz’s theocratic tendencies are perfectly aligned with his political fantasies, because his self-aggrandizing theology puts his own ambitions at the center of his God’s plans. That’s not hubris speaking, naturally. It’s no doubt the holy spirit, the voice of God, talking to us (through Cruz and his family).

It’s the kind of religious megalomania that makes for absurd theology — and frankly terrifying politics.

(via Raw Story. Screenshot via YouTube. Thanks to Peter for the link)