Rick Lanier is a Christian who’s been pretty successful at convincing local government officials to put up the words “In God We Trust” in their buildings and chambers. He says he wants to put up the country’s motto, though he really wants to promote his faith through government, even if symbolically. Everyone usually falls for it. 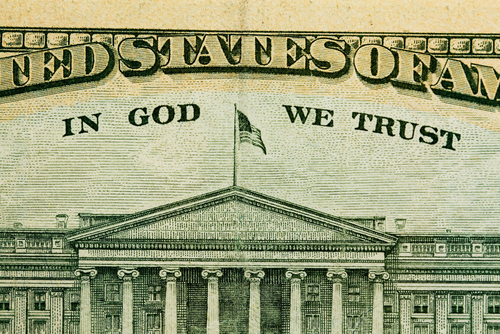 But Lanier got a cold reception recently when he walked into the Cherokee Tribal Council (in Tennessee) and asked them to adopt the phrase. Rather than pushing back on the religious aspect of it, they were furious that an outsider was coming in and telling them to adopt a U.S. motto at all:

“You have to understand our people to put up a sign like that. You don’t even know our people,” Councilmember Tommye Saunooke, of Painttown, told Lanier. “You don’t know what kind of beliefs we have, and it offends me to think that you need to tell us what to do.”

Even aside from the content of the resolution, it was a huge mistake for Lanier to submit the legislation under his own name, said Joey Owle, also of Wolfetown.

“Do we allow non-enrolled members to come in here and make resolutions dictating what we do here?” Owle asked Council.

Councilmember Teresa McCoy, of Big Cove, seconded that criticism but said she took issue with the contents of the resolution itself.

“Our society — my Cherokee society — is not your society,” McCoy told Lanier.

One council member later said the phrase evoked the ideas of assimilation and indoctrination.

Lanier had no idea how to handle the response:

“Can I just respond?” Lanier asked, as members of the audience murmured, “No, we don’t want to hear.”

Lanier later withdrew his resolution with the approval of the full council and left the building. Which must have been a beautiful sight.

It’s possible the Cherokees could ultimately put up a similar godly phrase in the building, but it would be a different statement and not the one Ranier wants them to put up.

(via Religious Clause. Image via Shutterstock. Thanks to Scott for the link)

February 12, 2016
Church Leader Anoints Congregation with the Hammer of Thor
Next Post