I Never Want to Be an Angel

This is a guest post written by Dave Hitt. He’s the author of Blood Witness, a novel about a Jehovah’s Witness who becomes a vampire. This piece was originally published on his website and is reprinted here with permission.

I was smoking my pipe at the edge of a park that had been infested with Word of Life preachers, when young girl approached me. She was about sixteen, short and cute and lightly pimpled. Full of confidence, she smiled, looked me in the eye and asked, “Are you sure you’re going to heaven?” 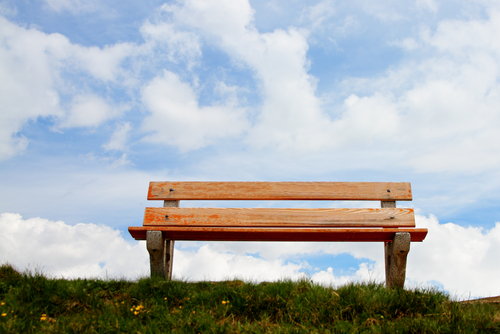 I took a pull on my pipe — pipes are great for dramatic pauses — and said, “I sure hope not. All the good musicians are in hell. I like Handel’s Messiah and I’m sure the angels do a kick-ass version, but it would get tiresome after a few days. I want to hear Hendrix and Jerry Garcia and Stevie Ray Vaughn and Janis Joplin and Keith Moon and The Ramones, and I’m sure none of them are in heaven.”

She froze. She had never heard that answer, and probably never heard of any of those musicians. There was fifteen or twenty seconds of dead silence between us. She was uncomfortable. I was amused. Then she took a breath, regained her composure and launched into her well-rehearsed script.

Most religions promise a joyful afterlife as a disembodied spirit. Few believers really think about how unsatisfying that would be. Me, I never want to be an angel.

We assume angels can hear and see, but they can’t bite into a freshly picked corn cob, roasted to perfection, slathered with real butter and topped off with a sprinkle of salt. They can’t savor a fine cigar, or sip some good whiskey, or gulp a cold beer. They’ll never again experience the exhilaration and exhaustion of hot, messy sex. Something as simple as the touch of a lover will be nothing more than a memory. They may be able to listen to music, but they’ll never stand on a stage in front of people who have paid to be entertained, banging on a cheap guitar and pouring their heart into a performance.

Eating junk food? Nope. Biting into a perfectly cooked steak? Never again. Experimenting in the kitchen, usually making something awesome but occasionally creating something horrible? They don’t get to do that.

They can’t take a long walk through a pleasant path, accompanied by a frisky dog. They can’t stand in a crowd watching fireworks and smile at the conversations around them. That street magician, who is wowing the crowd, doesn’t surprise or amaze them. A “Coming Soon” sign, announcing an interesting restaurant, won’t give them a pleasurable little ping of anticipation. There will be no guy with a purple Mohawk walking by.

They’ll never stand back and admire the house they just painted and say, “Damn, that looks good.” They won’t experience the heart palpations of narrowly avoiding a car accident with some skillful driving. They can’t calm down that angry customer, or close that difficult sale. The exhilaration of solving a difficult problem is foreign to them.

Whacking that ball and watching it sail into the sky. Changing a muddy tire without messing up your good clothes and still making it to the job interview on time. Working out a deal that satisfies everyone. Brownies, warm from the oven, washed down with a glass of cold milk. Mulling over a big mistake and figuring out what you did wrong, and not doing it again. Learning the secret to getting along with people you don’t like. Opening a package containing something really cool that you’ve been wanting for a long time. Finding a hidden treasure at a yard sale. Going into the attic and discovering something you like and forgot about. Sitting around a fire pit with friends and beers on a chilly night. Swimming in a brisk lake. Racing down the road with the wind in your face. None of it, ever again. Not for them.

February 12, 2016
Bryan Fischer: Methuselah Lived to 969 Because He Was Protected by a "Vapor Canopy"
Next Post