Gay Republicans Release Ad Tearing Down Hillary Clinton, as if the GOP is Better on LGBT Issues February 12, 2016 Hemant Mehta

Gay Republicans Release Ad Tearing Down Hillary Clinton, as if the GOP is Better on LGBT Issues

If you care about LGBT rights, then asking what political party you support should be a pointless exercise. Of course you support Democrats. They’re not perfect, and they took their damn time getting to that point, but most prominent Democrats now accept LGBT equality and embrace anti-discrimination policies.

Which makes you wonder: What the hell is up with Log Cabin Republicans? Why do they bother supporting Republicans who want nothing to do with them and want to make their lives that much more difficult?

The GOP-supporting LGBT group recently released an ad recently denouncing Hillary Clinton for not “evolving” on the gay rights issue until it was politically expedient for her to do so: 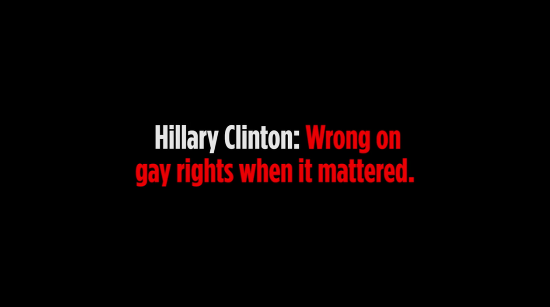 They’re not wrong. Clinton didn’t get on the right side of this issue until recently. Neither did President Obama. Bernie Sanders has historically been much better on the issue. But they’re all in the same, right place now.

Which makes you wonder: What the hell do the Log Cabin Republicans want? The video urges voters to dismiss Clinton… as if we should vote for a Republican instead? Are you kidding me?!

Dan Savage can’t believe it either, and he summarizes their position like this:

The video in question is supposed to be strategic. By tearing down Clinton, the LGC is essentially promoting Sanders, whom they feel would be an easier candidate for the eventual Republican nominee to defeat.

They don’t want Clinton in the White House, but they’d rather see President Ted Cruz. That’s the logic of the Log Cabin Republicans.

As an atheist who advocates for separation of church and state, I don’t think President Obama has been a perfect champion of our cause at all. There’s so much more he could do, and so many things he shouldn’t have done.

But I’m under no delusion that Republicans would be any better on the issue.

February 12, 2016
Why Do So Many Smart People Believe in So Many Ridiculous Things?
Next Post