Theodore Shoebat, a Christian extremist last seen on this site explaining how dissenters in his future theocracy would be put to death, now wants to put an end to that whole religious freedom idea.

And that means burning all the atheist books. 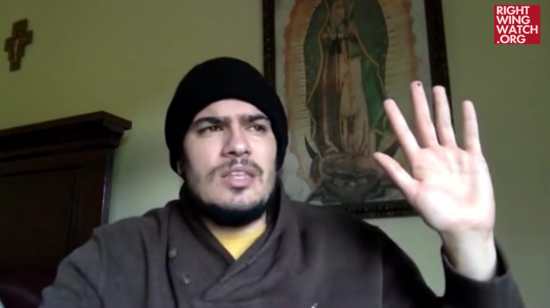 Atheism, Islam, Mormonism, Scientology, Occultism, basically anything anti-Christian, should not be allowed in society. It’s dangerous. It’s demonic. And look what it leads to! Guy wants to shoot up a church in Detroit. That’s what freedom of religion leads to.

That’s what atheism leads to. A giant mountain of skulls and dead people.

If this guy were brown, he’d be in *so* much trouble right now…

It’s ironic that he says atheism leads to dead people when his own fantasy involves killing dissenters.

As for the book-burning, I think I can speak for atheists everywhere.

Burn them. I don’t care. It’s called the Internet. We’ll be just fine.

February 10, 2016 CFI Won't Appeal Ruling Allowing Christian Ex-Convict Ministries in Florida to Get State Funding
Browse Our Archives
What Are Your Thoughts?leave a comment