It was one of those unusual stories out of the animal kingdom that seemed to elicit a reaction of awwww from everybody: A Siberian tiger at Russia’s Primorsky Safari Park befriended a goat back in November.

The goat, Timur, had been intended as food for the tiger, Amur, but won the big cat over with a show of courage when he

… took over the enclosure at a safari park near Vladivostok, forcing the tiger to sleep on the roof of his own lean-to. The media was soon full of footage of the two playing together, and Timur’s fans have even begun a campaign to elect him to parliament, arguing that he would be braver and more honest than current MPs. 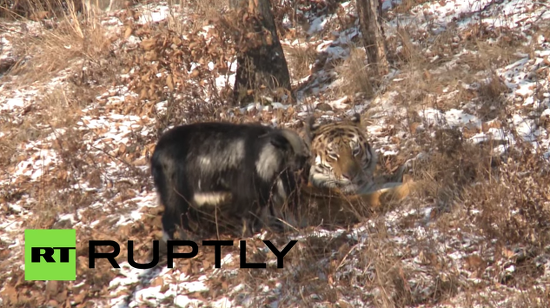 In an unfortunate if not unpredictable turn of events, the unlikely friendship was interrupted in January, when Timur’s daring went a little too far:

Then the tiger “rose and grabbed Timur by the neck as one would a kitten, and threw him up in the air,” Mezentsev said, adding that he would not characterize it as an attack, just a “lesson” to the goat. Afterward, the zookeepers gave the tiger a live rabbit, which he killed and ate, Mezentsev said.

All things considered, it’s one of those stories that probably sounds like it couldn’t get weirder… until you factor in Russia’s anti-gay fervor. Because to lawyer Alexei Krestyanov, a goat and a tiger hanging out is worrisome gay “propaganda” that will prompt “interest in non-traditional sexual relations.”

And it has to be squelched. For the kids.

“I think the positive coverage of this topic is nothing less than interference in the personal lives of minors, which is what hidden propaganda is, and public, active imposition of homosexuality,” Krestyanov wrote on Facebook.

The prosecutor’s office is now looking into the case, according to The Guardian.

Which proves, I guess, that Timur trying to bully his tiger chum is not actually the stupidest part of this story.