Ohio Firefighters Reprimanded for Posing for Christmas Billboard in Their Uniforms While on Duty February 9, 2016 Hemant Mehta

Pop quiz for all you church/state separation advocates out there. What’s wrong with this billboard? 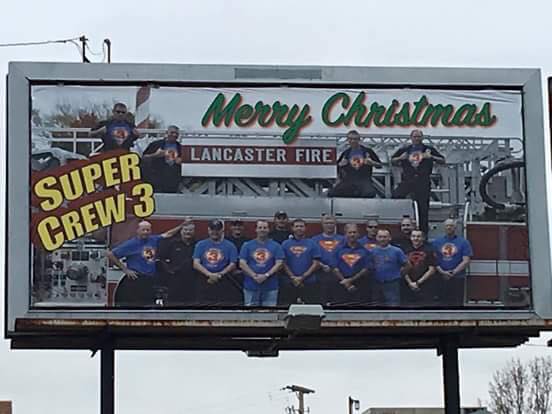 If you said, “They’re wearing their uniforms and posing with government equipment to promote a religious holiday for a billboard image they took while on duty,” you’d be right. (And eerily specific.)

That’s a billboard put up by members of the Lancaster Fire Department in Ohio last winter.

In a welcome move, the Lancaster City Law Director’s Office informed the Fire Chief that this behavior was unacceptable, suspending or reprimanding everyone involved in this waste of resources:

The billboard was displayed for about two weeks in December along Memorial Drive, the local stretch of Business Rt. 33 through Lancaster, until city officials ordered it removed.

Another government official, however, says this punishment is government overreach, representing a twisting of the First Amendment:

“I’m quite familiar with the First Amendment, and I’m sure that it doesn’t prevent these firefighters from using their own money to say ‘Merry Christmas’ on a billboard,” [Fairfield County Prosecutor Gregg] Marx said. “Liberals have so badly twisted the First Amendment that some misguided people think that government workers can’t express their personal religious views. That’s just wrong.”

I don’t know how Marx became a prosecutor when his words show complete ignorance of basic Constitutional law.

Of course the firefighters can put up a billboard like this on their own time.

What they can’t do — and what they are now being punished for — is take this picture while on duty, while using the name, uniforms, and equipment of the office, as if to suggest the government is promoting Christianity.

When they act as firefighters, they’re representing the government, not themselves. It’s as simple as that. It’s completely irrelevant that they paid for the billboard themselves. If they want to praise Jesus, they can do it loudly and proudly while off the clock, or in their minds while on duty.

This would be obvious if we were talking about non-Christian firefighters doing the same damn thing.

February 9, 2016
For Certain Christians, Lying for Jesus is Justified in the Abortion Wars
Next Post