For Certain Christians, Lying for Jesus is Justified in the Abortion Wars February 9, 2016 Rachel Ford

For Certain Christians, Lying for Jesus is Justified in the Abortion Wars

Leviticus 19:11 makes clear: “Ye shall not steal, neither deal falsely, neither lie one to another.”

There’s quite a bit of the Bible that conservative Christian activists tend to leave out, but Biblical prohibitions against lying are routinely given short shrift by those intent on seeing God’s will done on Earth. We don’t have to look far for examples of it — from Christians arguing that LGBT people are predators to politicians pretending that being gay is a choice, these lies are common.

The Washington Post has a good look at another popular outlet for faith-based lying: the abortion debate, and the notoriously deceptive idea of “crisis pregnancy centers.” Reporter Petula Dvorak examines the work of one Virginia activist, Pat Lohman, in particular. 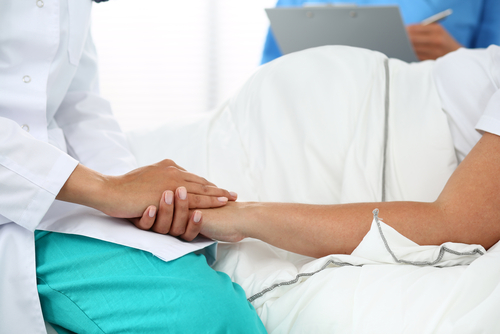 Same brick building, same sign, same generic office decor. The abortion clinic, Amethyst Health Center for Women, was on the right. The pregnancy center, AAA Women for Choice, is on the left.

Confused women seeking abortions would wind up in Lohman’s place, where she threw all she had at them — pamphlets, pleas, prayers, promises of help, used baby gear, bloody imagery, God — to change their minds.

“Deceptive? People say we’re deceptive? Okay,” Lohman told me. “But what the other guys are doing? That’s deceptive, too. Those girls have no idea what abortion really is. When I hear ‘pro-choice,’ that is a deception. And this country has forgotten about God.”

Lohman’s own memory of God can’t be all that great if she’s forgotten all the talk about deception. But, hey, why get bogged down in things your God has actually forbidden, when you’re crusading against the things you think God has forbidden? It’s like she thinks that even if God isn’t impressed by her “deceiving for Jesus,” surely He’ll be swayed by her argument of “But they’re doing it too!”

As Dvorak’s article explains, Lohman’s deception goes much further than your typical crisis pregnancy center — an already astonishingly low bar of honesty. In her particular case, Lohman’s network actually acquired the abortion clinic next door when its doctor retired. The purchasing lawyers pretended to represent “a group of medical office investors.” But in reality, the purchaser was “the Indiana-based Blessed Virgin Mary Foundation.”

The original signs remain up, while phone calls to the abortion clinic are automatically forwarded to the Christian group — something that began happening sooner than expected:

Just five minutes after signing the final papers at closing, the [retired abortion] doctor called her office to check her messages.

The doctor thought she made a mistake and redialed.

Whoever bought her practice had the phones forwarded to the pregnancy center within minutes of the sale, before the lawyers even had a chance to close their briefcases.

This is a new tactic, and one particularly dangerous to women as — despite pretenses to the contrary — they are not actually dealing with medical professionals when they call the Christian centers.

But buying a clinic is new, said Alena Yarmosky, who is with NARAL Pro-Choice Virginia.

When women call, they are asked “lots of intimate, personal, medical questions,” she said. And because the center isn’t a real health-care provider, “none of that [information] is confidential.”

NARAL workers made calls to the center, and in the recordings you hear the counselors answer the phone and simply explain that “we’re taking calls for them” when the caller asks for Amethyst [the abortion clinic].

Callers are persuaded to come in for a counseling session. And once there, women are grilled and lied to.

There is a questionnaire asking women intimate details about their sex lives.

The counselors at the pregnancy center told me they hear some awful things.

“It’s shocking. The STDs. The number of partners, how many young people,” said Susan Hays, the counselor on duty when I visited.

“We had an 11-year-old girl come in with her parents. They thought she was pregnant,” Lohman said. “Turns out she wasn’t. But we gave them all the information.”

Did they consider reporting a sexually active 11-year-old to authorities?

They tell women that condoms can be porous and unreliable.

They tell women they’ll have a hard time getting pregnant again after an abortion.

They tell women that abortion and birth control can cause cancer, a link unconfirmed by medical research.

The Crisis Pregnancy Center does everything it can to appear like a real clinic in order to foist lies and distortions on the women and girls who come through its doors. But it doesn’t trouble itself with following the regulations real clinics are bound by, because they’re not one. It’s the ideal situation for someone who doesn’t mind lying and who has no real interest in protecting women and girls.

And Lohman clearly doesn’t. On the contrary, she pretends that she’s just telling the truth. Even when patients realize the deceptions she’s engaged in.

“Oh yeah, they [patients] get angry, there’s yelling at us sometimes. But they just don’t want to hear the truth,” Lohman said. “But we are the ones telling the truth.”

This is the beauty, of course, of lying for Jesus: the ends always justify the means. Sure, Lohman’s entire practice centers on deception and lies, but she’s doing it for “truth,” so in the end, she’s the honest one. And the people she lies to? They just don’t want to hear it.

And if anti-abortion activists want to break the law in an attempt to discredit Planned Parenthood with lies about their fetal tissue usage? No big deal. Jesus loves con artists.

Tell me again how God is supposed to make you a more moral person?

February 9, 2016 Ohio Firefighters Reprimanded for Posing for Christmas Billboard in Their Uniforms While on Duty
Browse Our Archives
What Are Your Thoughts?leave a comment