The last time we heard about Harrison Mumia and his group Atheists in Kenya, he was filing a lawsuit against his country for declaring the Pope’s visit a national holiday. (The lawsuit didn’t go anywhere.)

The reason he’s in the news now is perhaps even more serious: When Mumia tried to register his organization (kind of like applying for non-profit status), he was rejected. The reason? According to the registrar, Maria Nyariki, giving them official status will ruin the country: 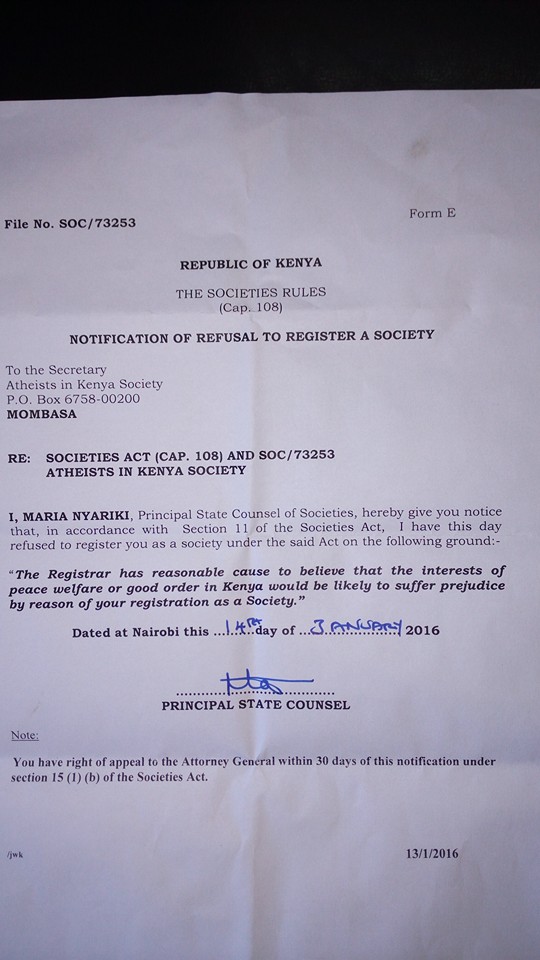 The Registrar has reasonable cause to believe that the interests of peace welfare or good order in Kenya would be likely to suffer prejudice by reason of your registration as a Society.

Mumia said late last night that he would appeal the decision, but he’s still appalled that it would have to come to this, especially when you think about which groups have received official status. In a press release, he made that very clear:

We have had church leaders who have defiled minors yet we know that they have been allowed to register as societies. How does the registrar come to the conclusion that we shall interfere with the good order in Kenya? Is she a magician?

It’s a fair point. The Registrar rejected his application on the basis of his reputation, not his actions. But religious groups that committed crimes were given a stamp of approval. The system is broken and Mumia plans to pressure them into fixing it.

February 5, 2016
An Atheist Explains the Importance of Speaking with Believers on Your College Campus
Next Post