When people make a large donation to a university, they sometimes receive the opportunity to put their name on a building. On a smaller scale, too, schools will tell donors that if they make a certain-size donation, they’ll get to choose the inscription that goes on a brick (or something similar). This is all perfectly fine… until the school forgets there are limits to what can be inscribed.

Last year, at the University of Florida in Gainesville, a donor requested that a particular archway include a Bible verse. Because that promoted Christianity, the Freedom From Religion Foundation asked that it be taken down. The school ultimately decided to include an atheist inscription (and two other neutral ones), putting an end to the problem.

We’re now seeing a similar story play out at the Colorado School of Mines. 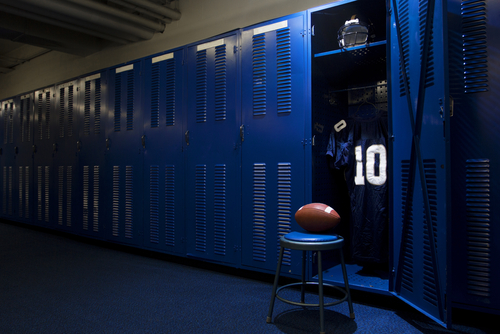 The school built a new athletic facility recently and they gave donors a chance to put an inscription of their choice on the various nameplates in the football locker room. One of the donors, Michael Lucas (a former player on the school’s football team), gave $2,500 and asked that his plate list two Bible verses: “Colossians 3:23 & Micah 5:9.”

While the text of those verses wouldn’t appear on the nameplate, here’s what they actually say:

Whatever you do, work at it with all your heart, as working for the Lord, not for human masters — Colossians 3:23

Your hand will be lifted up in triumph over your enemies, and all your foes will be destroyed. — Micah 5:9

So… religious and kinda creepy. But only the religious part matters. Specifically because the first verse mentions the Lord, the school told Lucas he couldn’t use that inscription.

Last October, upset that his religion wasn’t receiving the special privileges he’s used to, Lucas and his lawyers at Christian legal group Alliance Defending Freedom filed a lawsuit. He demanded the chance to proselytize via the nameplates.

The school had three choices: Allow the Bible verses to go up by themselves (and face a possible lawsuit from church/state separation advocates), allow the Bible verse to go up and open the door to religious messaging from anyone (Imagine The Satanic Temple running a Kickstarter campaign to buy up several nameplates…), or say no to inscriptions on nameplates altogether.

They finally decided on that last option. No inscriptions for anyone. A letter to donors this past December said they had the option of transferring their donations to a new program that didn’t allow for personalized messages:

Although we strongly stand behind the merits of the original fundraising program and our decision to maintain the locker room as a private space for the football program, rather than a public space for expression, we also wish to remove any potential for further misunderstanding. As a result, the university has decided to cancel the original football locker fundraising program, remove all existing plaques, and replace them with new plaques. All plaques have been removed, whether or not they contained a quote. We invite you to transfer your gift and participate in this new fundraising program.

The upside to all this was that Lucas’ lawsuit became moot. Since he wasn’t being treated differently, there was nothing to fight about. His lawyers withdrew their lawsuit this morning.

ADF is still pissed off, though:

“The school initially imposed no restrictions — or even guidelines — on the type of message a donor could include, and contrary to what the school argued, the First Amendment protects — not restricts — a simple reference to a Bible verse in this context,” said ADF Senior Counsel David Hacker. “Because the school apparently feared a simple Scripture reference would be like asbestos on the locker room walls, it decided to purge any trace of free expression from the facility.”

“Public colleges are supposed to be a marketplace of ideas, but the School of Mines has indicated it prefers anti-religious hostility,” said ADF Senior Counsel Tyson Langhofer. “It’s ridiculous and sad that the school felt the need to punish everyone who participated in the program simply because it could not stomach a Bible reference on one plaque — a reference that was not even going to include the text of the verses.”

Well, I agree the Bible verses would have been as enjoyable as asbestos. But the school’s motive here was to avoid conflict, not oppress Christians. They should’ve been more clear with their guidelines but that’s about the only thing they did wrong. I’m sure they know that moving forward. Saying no to personalized messages allows everyone to be treated the same way.

But equal treatment goes against what conservative Christians want. They think they’re above the law (see: Davis, Kim).

At least the school isn’t going to be punished for their decision on this issue.

February 5, 2016
The Relationship Between Atheism and Suicide is More Nuanced Than These Christians Think
Next Post