Suicide Bomber Gets Sucked Out of a Plane Hole That He Created and Falls to Earth in a Blaze February 4, 2016 Tracey

If you didn’t believe in karma before, like me, you probably still won’t — but this would be a great example of it.

A suicide bomber boarded a Somali passenger jet Tuesday and proceeded to detonate a bomb in mid-air. The blast blew a hole in the wall of the jet that sucked the blazing terrorist out, dropping his pathetic body 20 miles north of Mogadishu. Aside from the bomber himself, all of the 74 passengers survived, with only two of them reported injured. 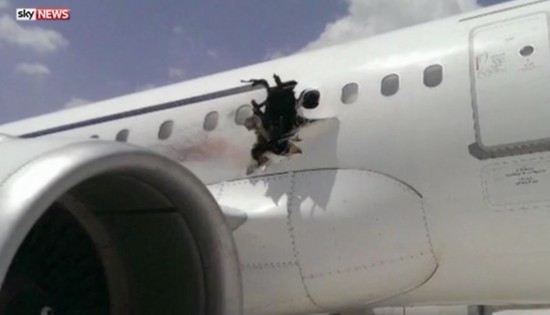 The Daallo Airlines Djibouti-bound flight made an emergency landing in Mogadishu shortly after taking off.

It’s believed the man managed to get the explosives past security by pretending to be wheelchair-bound. So far the person has not been identified, nor have any terrorist groups come forward to claim the attack.

Having only a burnt corpse and the blast as evidence, investigators are now backtracking before confirming the incident was an act of terror. Head of Daallo Airlines, Mohammed Ibrahim Yassin, confirms that explosive residue was found, but the findings are still considered inconclusive.

There’s a trace, but that cannot really make 100 percent that it’s a bomb.

The person seated next to the alleged suicide bomber has been arrested on suspicion of co-conspiring, and all other passengers are being thoroughly investigated.

As far as a terrorist attack goes, this is the best possible outcome. Unfortunately, though, the amateur terrorist will never feel the depth of embarrassment that he deserves.

February 4, 2016
73% of Americans Support Football Coaches Who Lead Their Teams in Christian Prayer
Next Post

February 4, 2016 The World of Science Could Do Without Major Cash Rewards
Browse Our Archives
What Are Your Thoughts?leave a comment