New Hampshire is Now the Least Religious State in the Country

Congratulations, New Hampshire! You have overtaken Vermont as the least religious state in the country. 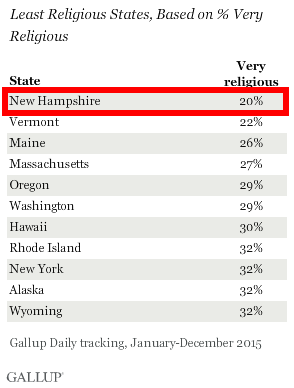 Gallup’s annual ranking shows that only 20% of the people in New Hampshire consider themselves “very religious.” It should be noted, however, that Vermont (which comes in second place this year) was even less religious last year than New Hampshire is today — their percentage of “very religious” people was at 17% then.

If you analyze the data by the percentage of non-religious people in the state, however, Vermont still edges out New Hampshire, 56% to 55%.

Meanwhile, Mississippi is the most religious state in the country for the eighth straight year.

Perhaps it’s appropriate that, in a week when one of the least religious politicians in recent history is vying for the Democratic nomination, New Hampshire receives this honor.

February 4, 2016
The World of Science Could Do Without Major Cash Rewards
Next Post