Ted Cruz Has Given Us a Glimpse Into His Dream Supreme Court Justice, and She’s a Nightmare February 3, 2016 Rachel Ford

Ted Cruz Has Given Us a Glimpse Into His Dream Supreme Court Justice, and She’s a Nightmare

Republican Ted Cruz has clearly stated in the past that he thinks ignoring Supreme Court decisions conservatives don’t agree with is a legitimate course of action. But his preferred response, of course, is to fill the Court with conservatives who will rule the way he wants.

That means appointing conservatives like Edith Jones, whose name (years ago) had been floated for nomination instead of David Souter, and whom Cruz has previously opined would have stopped same-sex marriage and overturned the Affordable Care Act. 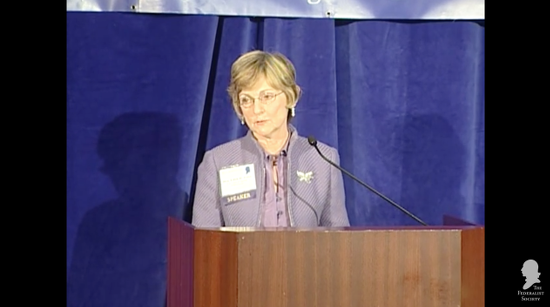 Think Progress‘ Ian Millhiser took a look at Jones’ views on workplace sexual harassment, and her views are, frankly, jaw dropping. (In a nutshell? Short of violent assault, it’s no biggie.) Then again, her views on equality, women’s rights, and minority concerns are no better. But if you ever wanted a glimpse into how unjust our justice system would be under a President Ted Cruz, keep reading…

Millhiser discusses a case in which Jones was the lone dissenter, finding against Susan Waltman and siding with her employer International Paper Company. The details of the case are extraordinary.

According to the majority opinion in Waltman’s case, the harassment began just weeks after she began work in one of International Paper’s mills. One co-worker “broadcast obscenities directed toward Waltman over the public address system,” while others made suggestive comments to her in person. After Waltman complained, and was moved to another shift, her supervisor “urged Waltman to have sex with a co-worker.” He “pinched her buttocks with pliers and tried to put his hands in her back pockets,” and made comments to her like “I would like a piece of that.”

Waltman “received over thirty pornographic notes in her locker.” Sexually explicit graffiti lined the walls of her workplace, some of which was explicitly directed at her. Workers hung used tampons from their lockers, and her co-workers repeatedly asked Waltman for sex. Yet, when she complained again, Waltman’s manager told her that “she should expect this type of behavior working with men.” Eventually, she was transferred to another shift. No one was disciplined for their actions.

Nor did the harassment end there. A contractor working in the mill grabbed Waltman’s arms while another stuck his tongue in her ear. A co-worker told her that “he would cut off her breast and shove it down her throat.” Later, the same co-worker “dangled Waltman over a stairwell, more than thirty feet from the floor.” Others pinched her breasts and grabbed her thighs.

After nearly three years of this treatment, Waltman complained to senior management. She says that the managers “intimated that if Waltman pursued an investigation it would hurt her chances of a promotion and make it impossible for her to work at the mill,” and International Paper took no disciplinary action against its male employees. Eventually, she quit after a co-worker “grabbed Waltman’s breasts and directed a high pressure hose at her crotch.”

Jones’ collegues were convinced that Waltman had a case after years’ worth of aggressive, violent sexual harassment — all of which went unpunished by management. Jones, though, felt differently. Noting that the incidents “were spaced well apart chronologically,” that Waltman did not demand more accountability beyond the numerous reports, and that only one of the harassers was a supervisor, she argued that the company should not be held accountable. Indeed, she seemed to struggle with holding anyone accountable for sexual harassment of any kind, short of “unwanted physical contact” (which, it should be said, happened in Waltman’s case).

We have so little social consensus in sexual mores nowadays that, short of incidents involving unwanted physical contact, it is impossible generally to categorize unacceptable sexual etiquette. It is likewise impossible to eradicate sexual conduct from the workplace — without unthinkable intrusiveness….Thus, the law is properly attuned to severe, pervasive and abusive conduct and results.

She similarly dismissed the incident with the supervisor as him “playfully putting his hand in her back pocket”; she pooh-poohed the sexually explicit graffiti with the (delusional) observation that “[s]imilar graffiti probably appear on workplace walls everywhere.”

It’s no wonder that Judge Jones didn’t feel women needed protection against sexual harassment, though, since she has also argued that there’s no constitutional right or liberty interest in protecting a minor girl against molestation by a teacher in Jane Doe v Taylor Independent School District. In her dissent against the majority opinion, finding in the girl’s favor, she took her colleagues to task for the

… airy assumption that Doe had a clearly established constitutional “substantive due process” right or liberty interest protecting her against “sexual fondling and statutory rape” by a school teacher. The majority must reach this conclusion so that they can hold that the school principal lacks qualified immunity for having poorly supervised the lecherous coach who plotted and consummated Doe’s seduction. If the principal is cast in judgment by a jury verdict, Doe can then recover Sec. 1983 damages and attorneys’ fees.

As she saw it, there was simply “no broad constitutional purpose to be served by recognizing for Doe’s benefit a constitutional right not to have her bodily integrity compromised by a teacher’s sexual abuse.”

Naturally, Jones is staunchly anti-abortion. She’s also not particularly keen on (presumably other) women having career opportunities or equality.

As to legislative efforts to promote women’s equality, Judge Jones notes that she has “always opposed the ERA as being unnecessary, contrary to the fundamental distinction between men and women, and leading to unforeseeable and unfortunate consequences.” She adds, “Although the 1964 Civil Rights Act contributed to the advancement of women’s careers in society, I would have to defer to others for an overview of the impact of these equal rights laws, when balanced against factors such as the increase of out of wedlock births, the prevalence of divorce, the sexualization of society and the youth. Women’s ‘rights,’ in the end, depend heavily on what goes on outside as well as in the workplace.”

And when it comes to victims of race and gender discrimination, she’s sure they’re little more than bitter, vengeful fakers:

The conservative jurist cited employment discrimination lawsuits as undermining the rule of law by being “targeted for purposes of revenge.”

She said the cases she has reviewed “seldom turn on evidence of race- or sex-based discrimination” but more likely involve “petty interoffice disputes, recrimination, second-guessing and suspicion.”

Did I mention, this is a sitting judge on the U.S. Court of Appeals for the Fifth Circuit, someone who is actually deciding cases as we speak?

Speaking of race-based discrimination, she certainly doesn’t think it happens in the workplace. She also thinks it plays no part in the judicial system.

The lecture [given by Jones in 2013] was not recorded, but witnesses recalled a number of Jones’ controversial statements. The views she expressed included not only that minorities are responsible for more violent crime than are whites, but also that claims by death row inmates that racism or arbitrariness infected their prosecutions, or that they are actually innocent or even mentally retarded, are merely “red herrings,” according to those who attended the lecture.

Moreover, according to the complaint, Jones asserted as fact the proposition that blacks and Hispanics are more likely to commit violent crimes. When asked to explain her comments, “she stated that there was ‘no arguing’ that ‘Blacks and Hispanics’ outnumber ‘Anglos’ on death row and ‘sadly’ it was a ‘statistical fact’ that people ‘from these racial groups get involved in more violent crime,’” reads the complaint. As an example, she noted that it is a “fact” that “‘a lot of Hispanic people [are] involved in drug trafficking’ which itself ‘involved a lot of violent crime.'” According to the complaint, when the lecture host abruptly ended the question-and-answer portion of the program Jones ‘lost her composure.'”

Needless to say, this is simply a lie (recent FBI statistics attribute 58.7% of violent crime to white people, and recent Bureau of Justice statistics note that there are more white people on death row than black). Had Jones focused on population percentages, she would have been on slightly more solid ground — but only slightly, as there’s plenty to suggest that white criminals will get off easier, for the same crimes, than black criminals.

No matter how you spin these comments, they’re wrong — and they’re a good indication of the very thing she’s pretending does not exist in the legal system: bias against black and Hispanic defendants.

If her comment about the “red herrings” of innocency, bias, and incapacity wasn’t sufficient to inform you that (the staunchly pro-life) Judge Jones really doesn’t give a damn about human lives, her reason for why the death penalty is awesome should:

Jones also said that a death sentence provides a public service by allowing an inmate to “make peace with God.”

The view that killing law breakers is a public service, a means to bring the unfortunate sinner that much closer to God, is hardly the only time Jones mixes her religious ideas with law. On the contrary, her entire outlook of law is predicated on her religious views (which explains a lot, all things considered).

As she explained in an address to the Harvard Society of Law in 2003:

“The integrity of law, its religious roots, its transcendent quality are disappearing. I saw the movie ‘Chicago’ with Richard Gere the other day. That’s the way the public thinks about lawyers,” she told the students.

“The first 100 years of American lawyers were trained on Blackstone, who wrote that: ‘The law of nature . dictated by God himself . is binding . in all counties and at all times; no human laws are of any validity if contrary to this; and such of them as are valid derive all force and all their authority . from this original.’ The Framers created a government of limited power with this understanding of the rule of law — that it was dependent on transcendent religious obligation,” said Jones.

She said that the business about all of the Founding Fathers being deists is “just wrong,” or “way overblown.” She says they believed in “faith and reason,” and this did not lead to intolerance.

“This is not a prescription for intolerance or narrow sectarianism,” she continued, “for unalienable rights were given by God to all our fellow citizens. Having lost sight of the moral and religious foundations of the rule of law, we are vulnerable to the destruction of our freedom, our equality before the law and our self-respect. It is my fervent hope that this new century will experience a revival of the original understanding of the rule of law and its roots.

“The answer is a recovery of moral principle, the sine qua non of an orderly society. Post 9/11, many events have been clarified. It is hard to remain a moral relativist when your own people are being killed.”

This sort of a-factual historical fantasy is the stuff David Barton‘s dreams are made of. But at least Barton isn’t deciding cases.

Cruz’s yearning for a Supreme Court appointment who is a “rock-ribbed conservative,” victim-blaming misogynist, racist, religious extremist like Edith Jones provides a clear view of his vision for a justice system in the United States: It’s one that’s intent on furthering the goals of the Religious Right, without regard (and often with deliberate disregard) for individual rights — and without regard for the crucial principles of separation of church and state, of due process, and of an impartial justice system.

February 3, 2016
Christian Hate Pastor: Gays Can't Have My Church Until They Give Birth to Kids Through Their Anus
Next Post