Arizona law makes clear that trespassing on someone’s property is illegal with varying punishments depending on the severity of the crime. If someone makes it clear they don’t want you to knock on their door, you can’t do it. It’s that simple.

That’s what a cop wanted to explain to Christian hate-Pastor Steven Anderson, after a resident complained that members of his church had trespassed on his property while proselytizing door to door.

Anderson wasn’t having any of it, though. In a taped conversation which he posted on YouTube, he explained to the cop that the Bible trumped any law created by man, so he was going to knock on every door he wanted to, “No Trespassing” signs be damned. It’s apparent that Anderson gets off on the idea of being a Christian martyr, to the point where he was even daring the cop to arrest him. 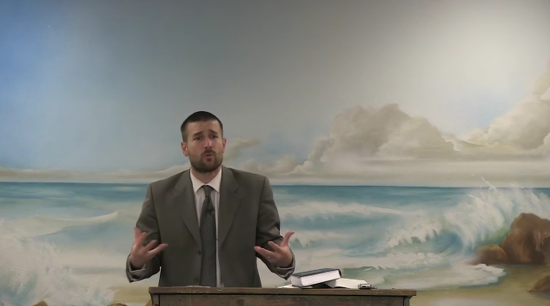 The cop tried to explain that Anderson is free to knock on doors, but not if there’s a fence around the property or a sign on the door that says visitors aren’t allowed.

Anderson took that as a violation of his religious rights. He told the cop to focus on the real criminals: men who wear dresses and abortion doctors.

I hope the cop got a drink after hanging up the phone. He deserved it.

February 3, 2016
Ten Commandments Sign in Mississippi Courthouse Will Be Replaced with "In God We Trust" Banner
Next Post