Christian Hate Pastor: Gays Can’t Have My Church Until They Give Birth to Kids Through Their Anus February 3, 2016 Hemant Mehta

Christian Hate Pastor: Gays Can’t Have My Church Until They Give Birth to Kids Through Their Anus

Now that hate-pastor James David Manning is on the verge of losing his church over unpaid debts, it looks like he’s saying anything he can before his 15 minutes expires.

And the fact that the Ali Forney Center, a place for homeless LGBT youth, may purchase his building is only sending him more quickly over the edge. 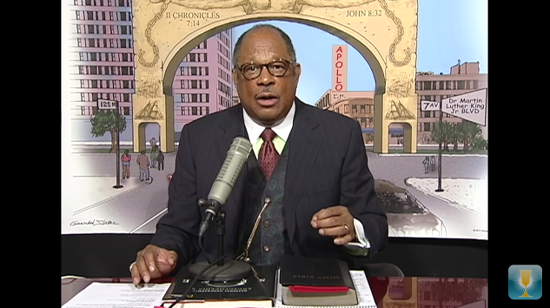 And before you can ever own this property, hook or crook… men who are fags with testicles will be carrying babies in their testicles and giving birth to them through their anus.

That’s how impossible it is for you to get this house. When you start carrying a baby in your bags and birthing that baby through your ass, then you can own this house. But until I see you pull a baby out your ass, you ain’t going to pull this church out from underneath us. And boom shakalaka goes right there.

And all you fags can go to hell!

I assume he’s quoting the Bible.

I mean, how else could anyone screw up sex education that badly?

At the end of the broadcast, he yells, “I’m James David Manning, everybody. I’m the Lord’s servant!” But that last word is almost inaudible. Which, at this point, would make perfect sense given that Manning seems beholden to no one, not even to the God he claims to believe in.

The Ali Forney Center has raised nearly $140,000 of the $200,000 it needed to purchase the ATLAH building. If the sale doesn’t work out, the money will still be going toward a great cause. So chip in if you can. Every dollar means more love and less Jesus-inspired hate.

February 3, 2016
After Detained Pastor's Release from Iran, His Wife is Under Fire for Alleging Domestic Violence
Next Post