It was hard not to do a little knee-jerk reaction cheering when Donald Trump lost in Iowa last night, especially with that ramble of a concession speech that sounded a lot like a drunken “I love you, man” frat boy rant than a political address. The Donald had been taken down a peg, and it was a glorious thing to behold.

Until it hit you that Senator Ted Cruz — easily the most radically conservative and religious viable candidate on the right — was the one who’d taken first prize. As he took a 30-minute victory lap that could have just as easily been mistaken for a backwater revival church sermon, glee gave way to dread. What did Iowa’s exaltation of this fire-and-brimstone evangelical over the favored business mogul mean? Was the Religious Right about to strike back with a vengeance?

I wouldn’t count on it. 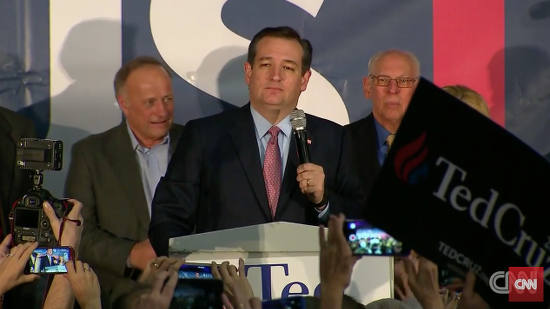 Iowa has always been home to a wide swath of religious voters. A whopping 77% of Iowa’s residents identify as Christian, with many of them falling into the older, white demographic that make up the Republican Party’s bread and butter. Cruz, much like Mike Huckabee and Rick Santorum before him, was always going to fare well in the Hawkeye State. In New Hampshire, that number is slightly lower — 70.6% — but that state is also far more liberal than Iowa, which makes it much less likely that Cruz will see the same level of support.

Much ado has been made about the turnout of Iowa’s Religious Right, though. There are those quick to argue that, if Iowa is any indication, Cruz isn’t just appealing to the faithful conservative, but drawing them to the polls. A statistic bandied about this morning has been that 62% of GOP voters in the exit polls identified as Christian.

But that’s far from a convincing figure. For starters, the proportion falls below the state levels of religious identification. If the GOP was really serving as a magnet for Christians, the number of those identifying as such in the exit polls should have been higher than 77%, not lower. The party as a whole is not as exciting as they think.

Moreover, despite Cruz’s arguable religious street cred, he still only captured 26% of the religious vote, with Trump garnering 24% and Marco Rubio pulling 21%. The much lauded Ben Carson in venerable fourth place? A puny 12%, and his religious gusto is up there with Cruz. This tells us a couple of things. First, religious vehemence is not the end-all-be-all for conservative voters. The chasm between Cruz and Carson illustrates that nicely, as does the religiously discombobulated Trump’s grab of the Religious Right’s votes. Second, no one candidate is pulling in the faithful. No one candidate is exciting them. And this is a time period where that should be the case. After all, conventional wisdom for the GOP primaries is that you run to the right until you get the nomination, when you retreat to the center. Even with all the sprinting that’s been going on, the pews are shrugging. If the candidates can’t get them raring now, it may prove difficult from them to be roused for the general.

And all that bluster in the end of night speeches? That’s about endorsements. As Huckabee exits the race with Santorum and Carson likely not far behind, candidates like Cruz and Rubio are working hard to capture their blessing and their supporters. Their praise performances have less to do with riding national momentum than they do consolidating already likely support.

So what handed Cruz the victory over Trump last night? How did he manage to flip the polls if not through religious zeal? The answer is quite simple: hoofing over hyping.

While most of us live in states with traditional primaries — where you simply go to the poll, cast your vote, and leave — Iowa has a caucus system. The difference, in short, is that communities will gather at designated locations to discuss candidates before casting their vote before everyone else. This creates an environment where voters can be pressured by the will of their neighbors to support a specific candidate. There’s judgment involved. As a result, the ground game in Iowa is incredibly important.

Actually, the significance of the ground game is why Iowa remains early in the primary game. It’s smaller than many other states, that’s true, but the size of the population means less funded or obscure candidates have a shot at getting traction by pounding pavement and meeting voters face to face. That’s how you win in Iowa. And though Cruz had name recognition, he knew he was going to have to do some persuading to overcome the notoriety of The Donald, so that’s exactly what he did.

Cruz pulled what’s referred to as the “Full Grassley” — named after Iowa Senator Chuck Grassley — which includes visiting all 99 of Iowa’s counties before the election. Trump, on the other hand, dodged questions about his ground game the entire time. Journalists were not allowed into his headquarters, and no information about their strategy was provided. The general assumption became that Trump was banking on media coverage to do his job for him. He didn’t count on Cruz building mini-coalitions within precincts to give him an edge.

And so, in the end, hoofing it across the state proved more valuable than hyping a brand. That has nothing to do with religion and everything to do with sound campaign strategy. Trump might be a successful businessman, but in the end, it looks like he’s also a pretty shoddy political operative.

Don’t get me wrong. Yes, it was good to see Trump lose. And yes, it was unnerving to see Ted Cruz win. But this is far from a year of religious resurgence at the ballot box, and the game is just getting started.

February 2, 2016 Former Australian PM's Decision to Address Anti-Gay American Group Sparks Concern and Confusion
Browse Our Archives
What Are Your Thoughts?leave a comment