The podcast Oh No, Ross and Carrie! features the hosts, Ross Blocher and Carrie Poppy, going undercover into different places and reporting on their experiences. They’ve done it with 9/11 “Truther” groups, Mormons, and exorcists.

And now, for their latest episode, they’ve joined the Church of Scientology. 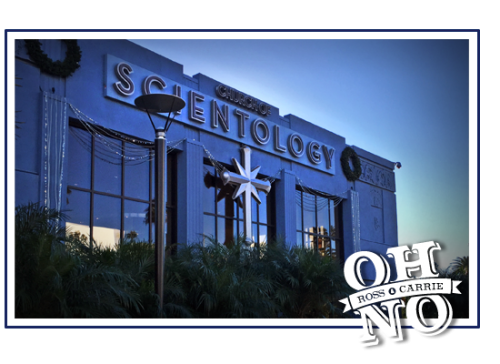 Ross and Carrie stop by “Big Blue”, Scientology’s L.A. Ideal Org. They come for the free personality test, but stay for two additional tests and a sales pitch. Do they sign up for classes? Does Carrie need to fix her relationship before it’s broken? Is Ross 100% American? Find out in the first part of the investigation you’ve all been waiting for.

It’s a five-part series that took two months from start to finish. They used their real names during the entire process, and it was only much later that the Church discovered who they were:

“I thought for sure they would look us up us right away,” says Blocher, “but it seems they didn’t catch on until one Sea Org member mentioned my name to a Mormon friend. By sheer coincidence, the friend had listened to our Mormon episode and put two and two together.”

There’s plenty to talk about up to that point, though.

If any parts of the episode stand out, please leave the timestamp and summary in the comments!

(Edit: The headline for this article originally said Ross and Carrie went “Undercover,” but that was a mistake on my part. They were open about who they were, as the post said.)

February 2, 2016
Lutheran Church Tells Old Woman She Can't Be Buried Next To Her Husband Because of Poor Attendance
Next Post