Our God is a Jealous God… and It Only Gets Worse From There February 2, 2016 Hemant Mehta

One of the most quoted lines in Richard Dawkins‘ The God Delusion is the passage that opens up Chapter 2:

Dawkins point was that, despite all those qualities, a lot of people had become immune to God’s awfulness, preferring to worship a loving, caring deity instead. But critics were no doubt furious that he had blasphemed God in such a way.

Who knew that Dawkins was being too kind in his assessment?

Dan Barker, the co-President of the Freedom From Religion Foundation and a former Christian preacher himself, says that the God of the Bible is much, much worse than Dawkins gave Him credit for. And in his new book, Barker explains why that is.

It’s called, appropriately, God: The Most Unpleasant Character in All Fiction (Sterling, 2016): 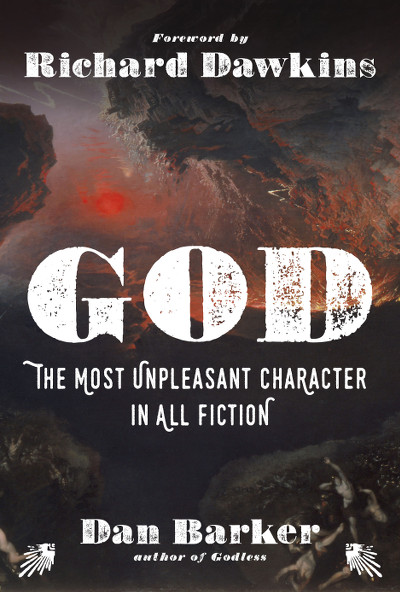 The book goes into detail for each quality Dawkins listed, quoting chapter and verse from the Bible to justify the description. And then it continues, rattling off even more unpleasant traits for God that Dawkins left out.

In the excerpt below, Barker explains why God is indeed “jealous and proud of it”:

Richard Dawkins could not have found a better way to begin his list.

If we were forced to reduce the entire Old Testament to a single word, what would it be? It would not be “love.” There is not enough love there to fill a communion cup. It would not be “law.” Most biblical edicts are dictatorial commands with a divine purpose aimed at something other than the common good.

The one word that sums up the scenario between Genesis and Malachi is “jealousy.” Almost every page, every story, every act, every psalm, every prophecy, every command, every threat in those 39 ancient books points back to the possessiveness of one particular god who wanted to own and control his chosen lover by demanding total devotion. “Love me! I am better than the others! Don’t look at them — look at me!”

You shall acknowledge no God but me, no Savior except me.
Hosea 13:4

That’s the Old Testament in a nutshell. Jealousy.

Jealousy is insecurity. It is the fear that someone you love will not love you back, a dread that they will choose someone else. It is possessive and controlling, based on an assumed right of ownership. Strong jealousy arises from a desperate need to be validated by the devotion of another, even if (or especially if) that “love” is forced. It is shaky vanity. It is the terror of losing the property that bolsters your sense of self-worth.

Jealousy is rooted in biology. We instinctively choose a mate primarily because of our “selfish genes” that evolved to be copied into future generations. In many primitive cultures, this translated into patriarchy, sexist control of access to females, harems, polygamy (for males only), submissive wives, ordinances permitting wives to be beaten and constrained, and females legally treated as property (see Chapter 9, Misogynistic). Notice that the Ten Commandments are sexist. They are directed at males, ending with the prohibition of coveting what your neighbor owns, which includes his wife: “You shall not covet your neighbor’s house; you shall not covet your neighbor’s wife, or male or female slave, or ox, or donkey, or anything that belongs to your neighbor” (Exodus 20:17). Why don’t the Commandments prohibit a woman from coveting her neighbor’s husband? It’s because wives were property, husbands were not.

It is obvious that the Old Testament writers were projecting their biological feelings of sexual insecurity onto their culturally derived deity, a male god. “For jealousy arouses a husband’s fury, and he shows no restraint when he takes revenge” (Proverbs 6:34). God’s chosen sweetheart, Israel, is often characterized as a wife or lover gone astray: “And the children of Israel did evil in the sight of the Lord… they went a whoring after other gods, and bowed themselves unto them” (Judges 2:11,17 KJV). “But you trusted in your beauty, and played the whore” (Ezekiel 16:15). As we will see later, in the eyes of the macho deity, “evil” and “wickedness” are rarely denunciations of harmful actions; they are most often synonyms for “jilting God.” If she doesn’t love me, she must be a bad woman.

In case there is any doubt that God was proud of his jealousy, look at the name he calls himself in the actual Ten Commandments in Exodus 34, the ones engraved on stone:

For you shall worship no other god, because the Lord, whose name is Jealous, is a jealous God. You shall not make a covenant with the inhabitants of the land, for when they prostitute themselves to their gods and sacrifice to their gods, someone among them will invite you, and you will eat of the sacrifice.
(Exodus 34:14–15)

Notice the word “prostitute.” That’s like calling a wife or girlfriend a “slut” because she talks to another man. “I will judge you as women who commit adultery and shed blood are judged, and bring blood upon you in wrath and jealousy” (Ezekiel 16:38), bellows the nervous, abusive husband who admits his very name is Jealous.

“God” is just a generic label, not a name. Any god can use it. Calling a god “God” is like calling a person “Person.” Why don’t we call the Israelite god by his real name, the actual name he proudly chose for himself? Let’s call the God of the Old Testament “The Lord Jealous.”

The Lord Jealous clearly has issues with sexual insecurity and self-respect, not to mention anger management.

God: The Most Unpleasant Character in All Fiction is now available online and in bookstores. You can read a review of the book at Rational Doubt.

Reprinted with permission from GOD: The Most Unpleasant Character in All Fiction © 2016 by Dan Barker, Sterling Publishing Co., Inc.