Lutheran Church Tells Old Woman She Can’t Be Buried Next To Her Husband Because of Poor Attendance February 2, 2016 Hemant Mehta

Doreen Pawelk was a member of St. Mark’s Lutheran Church in New Germany, Minnesota for more than 50 years, but the 84-year-old had more recently parted ways with their theology and stopped attending services. Still, after her church-going husband died last year, she assumed that she could at least be buried next to him when her time came.

But then she received this letter from the church telling her that, because she no longer attended services regularly, she’d have to find a new burial plot, too: 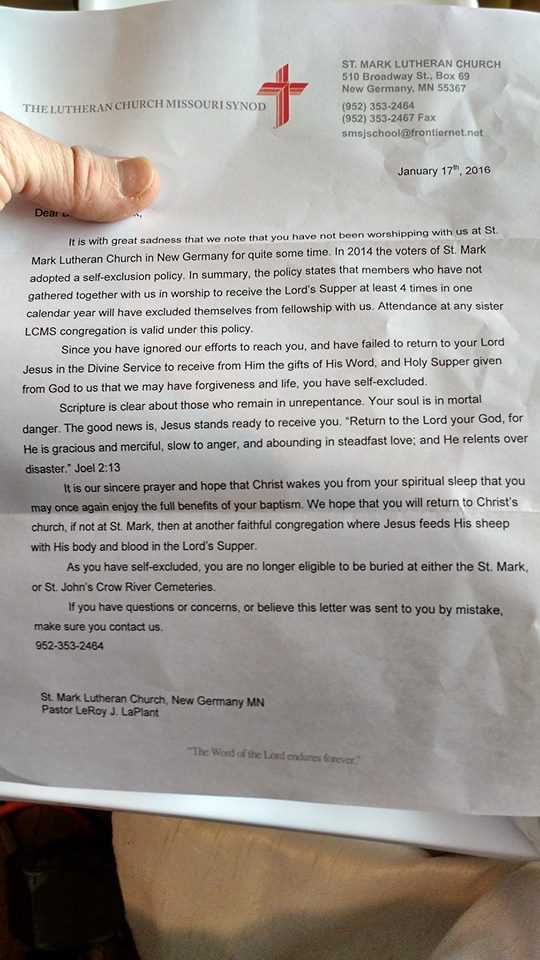 In 2014 the voters of St. Mark adopted a self-exclusion policy. In summary, the policy states that members who have not gathered together with us in worship to receive the Lord’s Supper at least 4 times in one calendar year will have excluded themselves from fellowship with us…

As you have self-excluded, you are no longer eligible to be buried at either the St. Mark or St. John’s Crow River Cemeteries.

The church is now in full-blown damage control mode:

Church leaders say they were actually trying to send Pawelk a letter telling her she had been peacefully released from the church after she told the pastor she didn’t want to be a member anymore; and received the letter about the church’s self-exclusion policy by accident.

“It was a mistake and we’ve been deeply apologetic and reached out to the family and we hope even today they will sit down with us,” Pastor LeRoy LePlant said.

“It’s their church and there’s no verse in the bible that says you must have communion four times a year or you are not going to go to heaven,” [daughter] Brenda [Mason] said.

Church leaders now say she can be buried next to her husband. Pawelk’s grandson says the family is set to meet with them on Wednesday.

It makes you wonder: How many self-exclusion letters is the church sending out that a mistake like this could even happen?

It’s also not the first time something like this has happened. This past August, a church in Georgia kicked out a 92-year-old woman for not tithing. The reason she didn’t tithe? She was too sick to attend services in person.