But when you’re the former Republican frontrunner yet you have to settle for a fourth place finish in Iowa, what do you have to lose?

At a speech last night, Dr. Ben Carson used his final plea to voters to bash advocates of church/state separation, saying they suffered from “schizophrenia” since God is everywhere in our politics. 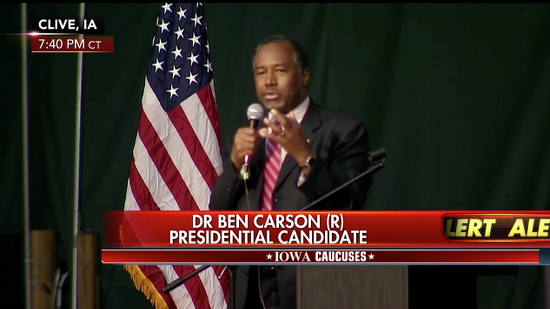 … We Americans must be proud of who we are. We cannot give away our values and principles for the sake of political correctness. And, you know, there are those — there are those who go around proclaiming “Separation of church and state! You can’t put anything up that has anything to do with God, certainly nothing to do with Jesus Christ,” and, you know, “I’ll have a seizure if I see a cross,” and all this kind of crap, you know…

The fact of the matter is: Do they realize that our founding document, the Declaration of Independence, says we have certain inalienable rights given to us by our Creator, a.k.a. God? That the Pledge of Allegiance says we’re one nation “under God”? Most courtrooms, on the wall, it says “In God We Trust.” Every coin in our pocket, every bill in our wallet, says “In God We Trust.” If it’s in our founding documents, it’s in our Pledge, in our courts, and it’s on our money, but we’re not supposed to talk about it, what in the world is that? In medicine, we call it “schizophrenia.” And doesn’t that explain a lot of what’s going on in our nation?…

Carson’s wrong so many times in that little speech…

We’re not having seizures if we see a cross. We just want the government remaining neutral on matters of religion, and we’re rightfully angry when we see Christianity get free government advertising.

The Declaration may mention a Creator, but we’re governed by the Constitution, which doesn’t mention God in any meaningful way. Even when it mentions religion, it’s only to say there can be no establishment of religion and no religious test for public office. (The only time it mentions the Lord is a formality in the date line.)

“Under God” in the Pledge? “In God We Trust” on courtroom walls and on currency? Those weren’t around when our nation was founded. Those phrases were wedged in there in the 1950s at the height of the Cold War.

And when Christian demagogues want to use the government as an extension of their church, we have every right to push back against their illegal actions.

It’s appalling Carson, a Presidential candidate, doesn’t understand that aspect of our history.

We don’t suffer from schizophrenia.

But Carson suffers from amnesia.

February 2, 2016 Our God is a Jealous God... and It Only Gets Worse From There
Browse Our Archives
What Are Your Thoughts?leave a comment