He recently asked Jeb Bush his thoughts on separation of church and state and whether he supported business owners who discriminated against their customers on the basis of sexual orientation (as we saw in Indiana last year).

Bush said that church/state separation needed to be respected, but then confusingly added that Christian business owners should be allowed to discriminate against gay customers: 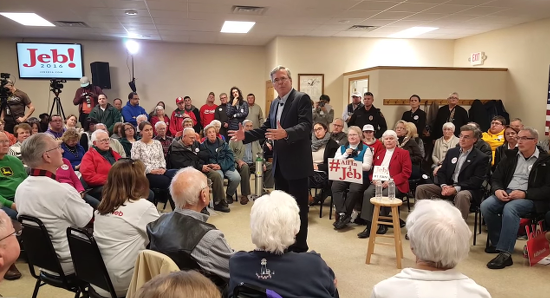 If you walk into a bakery, and you’re gay, and you say, “I want to buy that cake,” a person whose faith suggests that that is a sin, by law, has to sell that cake. But if you walked into the same store and said, “I want you to participate in my marriage with my companion,” you ought to have the right, based on religious conscience, to say no. There’s a difference. That’s what we need — we need to sort this out…

But people of faith ought to be able to act on their faith outside of their churches and outside of their homes. Religious conscience is a First [Amendment] freedom as well. And finding that common ground, I think, can be done. A florist needs to sell flowers to a gay couple, but if a florist is asked, “I want you to participate in the arrangements of the wedding,” where you’re actually participating in something your conscience does not allow you to do, they should have that protection.

And so this will be sorted out, and I think it’s important for people on both sides to not view this as a win, but to create the kind of tolerant country that we want. I worry more now, frankly, about the loss of religious freedom than I do about the other side of this. But we should be respectful of both.

I’ve never heard of a gay couple asking a Christian baker to “participate in my marriage with my companion.” I think they just want to buy a goddamn cake.

And unless florists are walking the bride or groom down the aisle, or ushering guests into their seats, they’re not part of the wedding, either.

And yet that’s the sort of “persecution” that Christians think marks the end of their religious freedoms.

February 1, 2016
Rand Paul Ignores Question About Why Atheists Should Vote for Him
Next Post