Thursday night’s Republican primary debate held promise, if only because Donald Trump and his antics would be absent. The Donald was apparently worried that Megyn Kelly would give him cooties, or, ya know, ask him substantive questions. With the carnival barker absent, this was an opportunity for the presidential hopefuls to demonstrate their gravitas and qualifications.

There was a chorus of conservative voices excited about Senator Marco Rubio afterwards, and that excitement wasn’t necessarily misplaced. Relative to the rest of the folks on the stage, Rubio didn’t do terribly. That said, not doing terribly on a stage full of absurdity isn’t saying much. There was one instance, in particular, that deserves a point-by-point analysis of the nonsense. 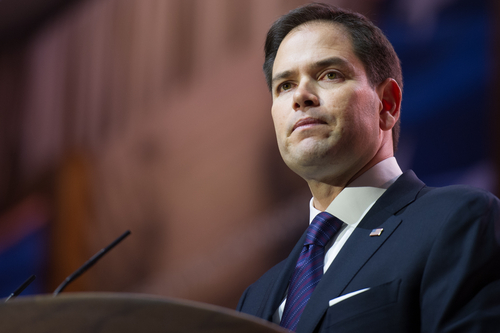 The eye rolls start early here, as Christ Almighty is invoked in the name of poll points:

BAIER: Now let’s talk about electability, Senator. TIME magazine once called you “the Republican savior.” Rush Limbaugh and others said you likely will be president some day.

But if you look at the recent average of polls in your home state of Florida, you’re in third trailing Donald trump by 24 points. If the people who know you best have you there, why should the rest of the country elect you?

RUBIO: Well, let me be clear about one thing, there’s only one savior and it’s not me. It’s Jesus Christ who came down to earth and died for our sins.

Talk about blatant pandering. He was ready for that one, and took advantage of a moment to bang that Bible hard.

But you know what, if we’re looking at a comparison to Christ, Rubio is definitely right that he doesn’t fit the bill. An unapologetic capitalist who takes pride in discriminating against members of the LGBT community, wants to send all immigrants packing, and thinks he knows more than women about what they should or should not do with their bodies, he couldn’t be further from the man he’s praising.

RUBIO: And so — and I’ve always made that clear about that cover story.

Disastrous, eh? That’s quite the statement. What’s happened over the past 7 years? What has Obama done?

I could go on. Yes, not all of these can be wholly attributed to Obama, but if the GOP is going to lay the blame for the entirety of an imaginary waking nightmare at his feet, there’s no reason Obama can’t claim the wins.

But Rubio didn’t stop there.

We don’t want to be Sweden. We want to be the United States of America.

The U.S. becoming more like Sweden? OH THE HORROR! You know what some of the differences are when you live in Sweden instead of the U.S. are?

But let’s put aside the Sweden thing for a second, and talk about this whole socialist drum that Rubio and others have been banging. The problem with banging said drum is that they have no idea what they’re talking about.

For starters, Sanders isn’t a pure socialist; he’s a democratic socialist. He’s spoken openly on the subject in the past, but the short version is this: democratic socialism refers to a political system whereby citizen contributions generate services and infrastructures that provide public benefit and a higher quality of life, and economic regulation that addresses income inequality and fraud while continuing to encourage innovation.

In short, it’s sort of what we’re trying — poorly — to do with our current structure. Sanders wants to take the nation to the next level. Rubio can take issue with that, but he’s only muddying the conversation at this particular point.

Sanders wasn’t his only target. He couldn’t not take aim at Clinton, of course.

Alright, he’s got a little bit of traction here. There’s a strong case to be made that Clinton could and should be brought up on charges for the email fiasco, but in this political environment, it’s just not going to happen. But lying to the families of those killed in Benghazi? Rubio is once again wandering into la-la land on that one, repeating the bedtime stories the GOP has been reciting for years now. How many committees must be convened to put that myth to bed?

It may seem a little silly to spend all this time scrutinizing Rubio, especially so small a chunk of his speaking time the other night. But even though the polls aren’t looking great for him right now, and even though Rubio himself shirks from the label, he may well be the savior for the GOP when it comes down to it. He’s young, he’s a solid orator, he’s improving in the debates, he’s more substantive than many of the other candidates, he’s got a much better collaborative track record in Congress, and carries far less baggage than many in the field. He’s still extreme, but compared to the folks he’s going up against, he looks positively moderate.

That’s why scrutinizing his nonsense matters. Don’t get lulled into thinking he’s “not that bad.” He is. You just need to pay attention to see it.

January 31, 2016
Who Could've Known That a Christian Ministry Worker Would Proselytize in a Public School Speech?
Next Post

January 31, 2016 Washington State Politician Posts Another Anti-Evolution Poem on Public Facebook Page
Browse Our Archives
What Are Your Thoughts?leave a comment