Last winter, the Freedom From Religion Foundation sent a letter to the Jefferson County Board in Illinois after they were notified of two Nativity scene displays at the local courthouse. It took a while, but Sheriff Travis Allen responded this week with a letter that screams “Look at me! I’m a big boy! I’ma coming after you!” 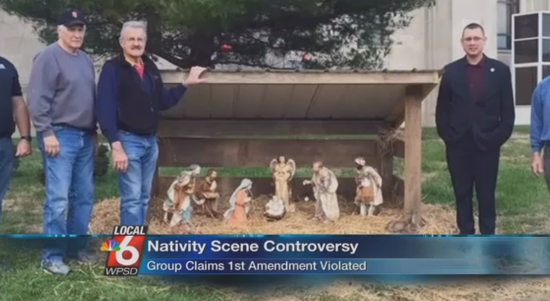 I have said it once and I will say it again. The nativity scenes were part of a traditional Christmas display. I am not sure how you could have a Christmas display without a nativity scene, because I think we both know Christmas is a FEDERAL holiday that celebrates the birth [of] Jesus Christ. This is in no way Jefferson County trying to impose a religion on anyone. Everyone in this County is free to believe whatever they want. This is just us celebrating a FEDERAL holiday!

In your letter you stated that you had 700 members in Illinois. I would like to know how many reside in Jefferson County. I am not sure I would be bragging about 700 members in a state that has almost 13 million residents. We have almost 10 times as many people on our Jefferson County Sheriff’s Office Facebook Page.

I am sure you sent this letter to the County Board because you thought you could bully them into complying with your demands. The thing is in Jefferson County we don’t really like bullies and we are not very good at bowing down to organizations. I actually only bow to one man, but you don’t believe in him anyway.

Isn’t that adorable. Someone pat him on the head and burp him.

Where do you even start with this?

Of course you can have a legal Christmas display without a nativity. Santa, reindeer, candy canes, elves, etc.

Just because Christians are in the majority doesn’t mean the government gets to impose that religion on everyone else. The real question is whether an atheist, Satanist, or non-Christian display would be permitted outside the courthouse. Is this an open forum or a substitute church? As far as I know, nobody has tested this by submitting such a request. Both Nativity scenes were put up only because Allen wanted them there, not because a citizen requested them.

The Facebook page numbers are also irrelevant. Even if FFRF had just one member in Jefferson County, that’s enough. Asking for the government to remain neutral on matters of religion only takes a single person.

All he has to do is tell FFRF that non-Christian displays are welcome outside the courthouse. If that’s the case, then this whole controversy is over. (At least until this coming December, when I’m sure someone will ask for an atheist banner to go up.)

Instead, Travis took the low road, proving to the world that Jefferson County’s law enforcement is led by someone with the maturity level of a toddler.

January 30, 2016
An Atheist's Incredible Rap Response to B.o.B and His Flat Earth Theory
Next Post

January 31, 2016 Only a God That Doesn't Work "Works in Mysterious Ways"
Browse Our Archives
What Are Your Thoughts?leave a comment