Yesterday, he asked Dr. Ben Carson about his faith — specifically how religion would play a role in his presidency and whether he, like Ted Cruz, thinks of himself as a Christian first and American second: 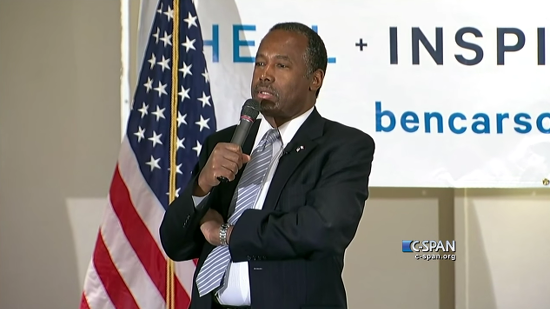 Justin: Thank you for attending. I’m an atheist voter. I’m not planted here, I am born and raised in Iowa. I have a question about how your faith will play a role in your presidency.

Justin: First off, some candidates have said that God’s Law trumps our country’s law. Do you agree with that and can you name a situation where that would be the case? Secondly, Mr. Cruz had said that he is a Christian first, an American second. Does that hold true for you?

Carson: Well, first of all, everybody, including atheists, live according to their faith. It’s just what they decide to put their faith in. And everybody’s [actions] are ruled by their faith. Now, in my case, you know, I have strong faith in God and I live by godly principles: loving your fellow man, caring about your neighbor, developing your God-given talents to the utmost so that you become valuable to the people around you… and that’s going to dictate how I treat everybody. Fortunately, our Constitution, which is the supreme law of our land, was designed by men of faith. And it has a Judeo-Christian foundation. Therefore, there is no conflict there. So it is not a problem.

Does that answer your question?

Justin: Not so much. My question was: Can you give me a situation where God’s Law trumps any law within our country. From your point of view.

Carson: Well, if we create laws that are contrary to the Judeo-Christian values that we have, then I think that we should fight against those kinds of laws. I personally believe that we still have an obligation to obey the laws, whether we agree with them or not, because otherwise we would be a lawless nation, but that doesn’t mean that we shouldn’t fight against anything that we see as unjust. And we have the mechanism built into our system to allow those protests to take place.

Justin: And then what are your thoughts about the question about Mr. Cruz’s statement, about being a Christian first and an American second?

Carson: I would always say: Mr. Cruz can speak for himself.

According to a reporter from TIME Magazine, someone in the audience then yelled, “I’m a Christian, I’ll pray for that atheist guy.” To which Justin responded, “Please don’t.”

Carson’s response wasn’t surprising. It’s par for the course for Republicans to say they love the Constitution and respect the law… unless it’s inconvenient for Christians, in which case they’ll go out of their way to carve out exemptions.

Given Carson’s evolution denial, pyramid conspiracy theories, and general end times theology, there’s no reason to think he would uphold the Constitution if it didn’t sync up with his faith.

January 30, 2016
Why Richard Dawkins Was Booted from the NECSS Conference
Next Post

January 30, 2016 Texas Supreme Court Says High School Cheerleaders with Bible Banners Can Seek Relief from District
Browse Our Archives
What Are Your Thoughts?leave a comment