After nearly a month of patiently waiting out the heavily armed tantrum of Ammon Bundy and his supporters in Oregon, law enforcement officials apprehended Bundy and several members of his occupation earlier this week. One member of the group, LaVoy Finicum, was killed in the incident. 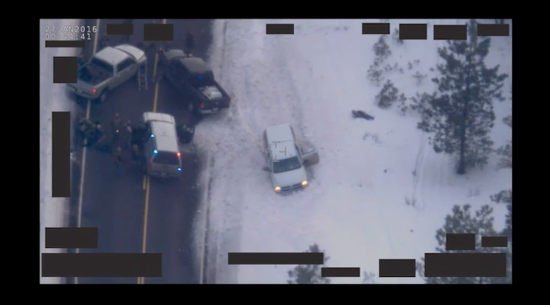 Greg Bretzing, the Special Agent in Charge of the FBI in Oregon, describes what happened:

As the white truck [that Finicum was driving] approaches the roadblock, there is a spike strip across the road but it appears Finicum missed it as he attempted to drive around the roadblock. He nearly hits an FBI agent as he maneuvers to the left. The truck gets stuck in the snowbank.

Finicum leaves the truck and steps through the snow. Agents and troopers on scene had information that Finicum and others would be armed. On at least two occasions, Finicum reaches his right hand toward a pocket on the left inside portion of his jacket. He did have a loaded 9 mm semi-automatic handgun in that pocket.

The FBI has released a nearly half-hour video clip of the operation, as well as an 8-minute condensed clip that focuses on the arrests. The events Agent Bretzing describe begin around the 5:45 mark in the shortened clip.

Bretzing’s statements came as a response to the “various versions of what occurred during this event: most inaccurate, some inflammatory.”

Which seems like a highly apropos description of Nevada Assemblywoman Shelly Shelton‘s take on the incident. Referring to Finicum’s death on Facebook, she calls OSP “his executioners,” saying

Today we were reminded that the power of evil is still alive and well as LaVoy Finicum was gunned down and murdered in Oregon. LaVoy was a man who had documented the suffering to which he and his family had been subjected, via the heavy hand of the government, through his writings and his videos.

Now, it’s only because the FBI acted with restraint — something that law enforcement is often criticized for not displaying — that there wasn’t more bloodshed. This is a situation in which heavily armed law breakers (who had indicated their willingness to die for their cause) repeatedly refused to stand down. Finicum himself had nearly run down an officer prior to exiting the vehicle; and he exited the vehicle and remained unharmed until reaching for his gun. That is a far cry from murder.

But Shelton sees him as a hero, a man who “operate[d] outside the box”… like Jesus and Moses.

In any given generation there are men who are willing to stand for what they believe. Most of the time they are demonized and the uninformed are made to believe they are criminals.

From Moses who killed an Egyptian for abusing his people, to Jesus who died on a cross as a condemned criminal, many of those who operate outside the box and promote love and justice over the current form of government are treated as outcasts and many times murdered.

The fact is, Finicum died because he brought guns to support rogue ranchers’ demands for free stuff and exemption from the laws from the government — and was getting ready to use one of those guns on law enforcement officers. (You know, just like Jesus would have done.)

I’m not sure what Bible Shelton read, but I guess I missed those chapters growing up…

January 30, 2016 An Atheist's Incredible Rap Response to B.o.B and His Flat Earth Theory
Browse Our Archives
What Are Your Thoughts?leave a comment