The View Discusses Whether or Not an Atheist Can Be President January 29, 2016 Hemant Mehta

The View Discusses Whether or Not an Atheist Can Be President

I tensed up when I heard that The View was discussing whether or not an atheist could be President. After all, this is the show where co-host Candace Cameron Bure attempted to defend Creationism just a couple of months ago.

But the discussion turned out to be both relevant and not-totally-horrible. Relevant because two of the current frontrunners are not known for their religiosity (though Donald Trump would love to convince the Republican base otherwise). And not horrible because some of the panelists made clear that the President didn’t necessarily have to share their faith to do a good job.

Even Cameron Bure made some sense. 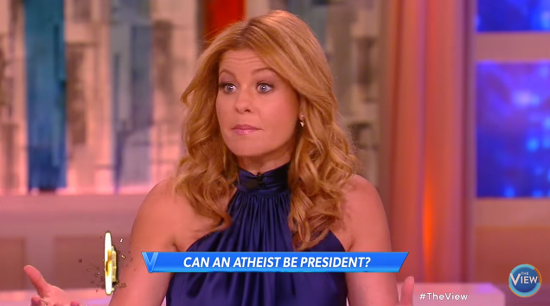 Cameron Bure: First of all, I appreciate Bernie’s honesty. I like that he didn’t try to play up the fact that he was a more spiritual Jew than he really is, so I really appreciate that…

And I think he relates to a lot of people that say, “Hey, this is my faith or what I was born into, I relate to it, but I don’t practice it.” But for me, looking at a Presidential candidate, I want to look at the foundation of which they’re gonna build our country upon and what that foundation is for them. So it’s like when I think of building my house, I want a solid foundation. So the morals, the views, the virtues, those are important to me. And Bernie may have all of those…

That last bit surprised me since I was fully expecting her to say a non-Christian was incapable of having that foundation. She may think that, but she didn’t say it.

Guest panelist Sunny Hostin also added that she was surprised people would be less likely to vote for an atheist because she hoped separation of church and state would remain strong.

It’s sad, isn’t it, that we can celebrate a brief television discussion of faith in politics just for not devolving into atheist bashing?

January 28, 2016
This is an Easy Way to Modernize the Bible
Next Post