Texas Mayor Who Put Up “JESUS Welcomes You to Hawkins” Sign Says Critics “Have Hate in Their Heart” January 29, 2016 Hemant Mehta

Two of our favorite people came together yesterday for a meeting of the closed-minds.

Mayor Will Rogers — best known for his “Jesus Welcomes You to Hawkins” sign in Texas — appeared on Gordon Klingenschmitt‘s “Pray in Jesus Name” talk show. The two discussed how the atheists who urged Rogers to take down his sign must have an ulterior motive (5:13 mark): 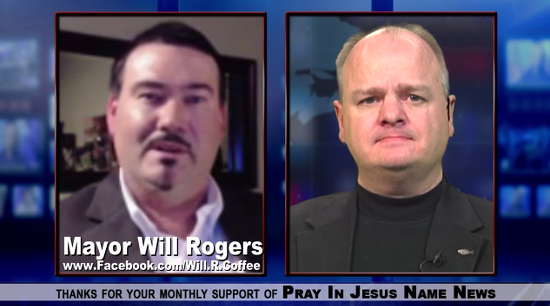 Rogers: The problem is, is that, like most towns, we have a group of individuals that have hate in their heart. And whether they hate the mayor, or they hate Jesus, or they hate their life, or whatever that is, they want to cause problems in politics… If you’re not about what they want, then they want you out of office. And I believe the attack on the sign was based off of an attack on me. And it’s backfired on all of ’em…

Rogers doesn’t get it. This isn’t about hate. This isn’t about Jesus. This isn’t even about Hawkins. No one’s telling him to stop being a Christian. They’re simply reminding him that the law doesn’t allow a mayor to promote religion in that capacity. The local government can’t put up a sign promoting Christianity on city property.

Both Rogers and Klingenschmitt are delusional. They’re both preachers who hold government positions, and they don’t know how to keep the two worlds separate. They think everyone’s out to persecute them because of their faith when the truth is their critics just want them to keep things neutral when they’re acting in their elected capacities.

January 29, 2016
Pastor Says Anti-Gay Discrimination Should be Legal Because a Gay Student Once Shot Her Classmate
Next Post

January 29, 2016 Neil deGrasse Tyson Sheds His Suit Jacket to Go After Flat-Earther B.o.B. and Ignorance in General
Browse Our Archives
What Are Your Thoughts?leave a comment