Pastor Says Anti-Gay Discrimination Should be Legal Because a Gay Student Once Shot Her Classmate January 29, 2016 Rachel Ford

The other day, I posted about the Florida subcommittee hearing on anti-abortion measure HB 865 and how that meeting took a racist turn when one of the supporters said that abortion needed to be banned because “white culture” was being lost to groups like Muslims and “the Mexicans” who didn’t “kill the babies” like white women do.

On Tuesday, another subcommittee hearing ventured into similarly dicey waters.

Pastor Anthony Swain urged lawmakers to pass a “religious freedom” measure because people need protection from gay people. Why? Because people of “a homosexual nature,” he said, were “forceful” — to the point of murder — against those of a godly disposition (which, as he told it, seemed to be defined as everyone who’s not gay). So straight people had to be legally empowered to discriminate against gay people. 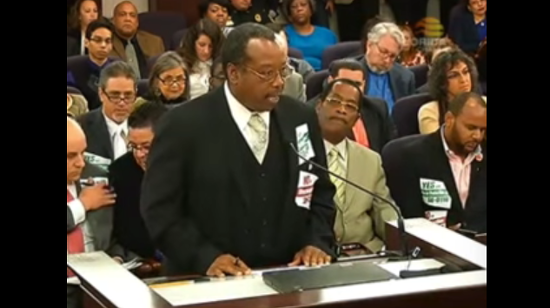 Speaking in support of SB 110, which would provide certain exemptions to non-discrimination laws for pastors and religious organizations, Swain said:

[I] urge you to vote yes on this particular bill. As my predecessors explained earlier, it goes far beyond the protection of the pastors; but those of us who are working the streets, the schools, and the various industries, we see that there is a need for it, because at Dillard High School, about three years ago, a young lady approached another young lady that was not of a homosexual nature. And she wanted to have sex with her. She told her “No, I don’t do that.” And the girl took out a gun and took her life. In school. Dillard High School.

Not only is it effective at Dillard High School, but other high schools that we encounter and go to. They are very forceful, and they’re very demanding toward those that are of a godly nature, and we ask you, we urge you, we beg you to pass this bill. Vote yes on 110.

The argument is essentially: A lesbian high school student once did something awful, therefore all gay people are absolutely awful. So let us discriminate against them.

Even though being allowed to legally discriminate against gay people has nothing whatsoever to do with the Dillard school shooting. It certainly wouldn’t have prevented it.

This is terrible logic. On the other hand, I’m sure Paul from the abortion hearing is sighing in relief that someone else is in the running for uttering the craziest thing Florida lawmakers have heard this week.

January 29, 2016 Texas Mayor Who Put Up “JESUS Welcomes You to Hawkins” Sign Says Critics "Have Hate in Their Heart"
Browse Our Archives
What Are Your Thoughts?leave a comment