A couple of weeks ago, an atheist in Tennessee delivered an invocation address, only to be cut off by the Mayor before her time was up. (It received little media coverage.)

Now a similar thing has happened to a Christian pastor in Ohio and everyone’s up in arms about it.

Pastor B.J. Van Aman of the Pickerington Baptist Temple in Ohio gave an invocation prayer in the State House that Just. Kept. Going.

Eventually, he overstayed his welcome to the point that House Speaker Cliff Rosenberger (on the far right in the image below) had to ask him to stop. You can see it happen in the video below around the 6:50 mark. 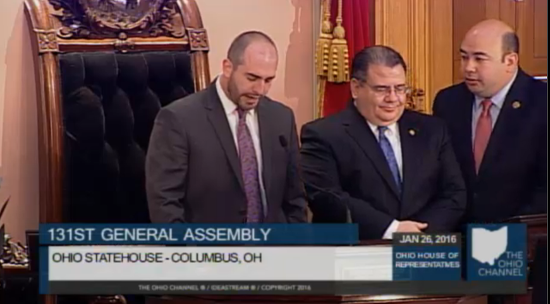 There was nothing malicious going on here. Certainly nothing anti-Christian. The pastor just wouldn’t stop, and after five minutes, even the politicians knew they had to get to work.

“I didn’t mean to be rude and I feel terrible,” Rosenberger said. “It’s just that I felt that I gave it its due diligence. When I thought it was enough I didn’t know really how best to do it, so I just said ‘amen’ and here we go.”

Rosenberger first peeked an eye open about three minutes in. At nearly four minutes, he opened his eyes and began looking around, clearly growing anxious about the length and trying to decide the right way to end it.

After just over five minutes, with no clear conclusion on the horizon, Rosenberger blurted out an “amen,” thanked Van Aman for being here and then motioned toward the flag to start the Pledge of Allegiance.

There’s an easy way to solve this: Just make sure all speakers have a maximum time limit and hold them to it.

Or, you know, stop wasting time with invocations altogether.

January 29, 2016
The View Discusses Whether or Not an Atheist Can Be President
Next Post