About four years ago, atheist Justin Vacula and the NEPA Freethought Society attempted to place the following ad on buses in the County of Lackawanna Transit System (COLTS) in Pennsylvania:

That’s almost literally the least offensive atheist ad ever. It says the word… and little else.

COLTS, however, rejected the ad, calling it too “controversial.”

Justin appealed the decision with the help of American Atheists, but the COLTS leaders didn’t change their minds.

So Justin tried again the following year. He submitted a similar ad without mentioning American Atheists.

Once again, he was rejected. In fact, COLTS voted on a new policy to prevent this “debacle” from ever happening again:

To be sure, you could argue that an ad simply reading “Atheists” is religiously neutral… but hey, they passed a policy that now prohibits religious and non-religious advertising. Equality for all, right?

Well, Justin didn’t give up. A revised ad, stripped of even the word “atheist,” was finally approved by COLTS:

So this raises an interesting question: Was COLTS discriminating against atheists?

If you’re thinking “no,” because COLTS bans all religious/political/advocacy advertising as well, that’s just not true. In fact, since the time Justin’s first ad was rejected, COLTS allowed advertising from:

This is also the same transportation company that ran the message “God Bless America” on its buses well before Justin came along: 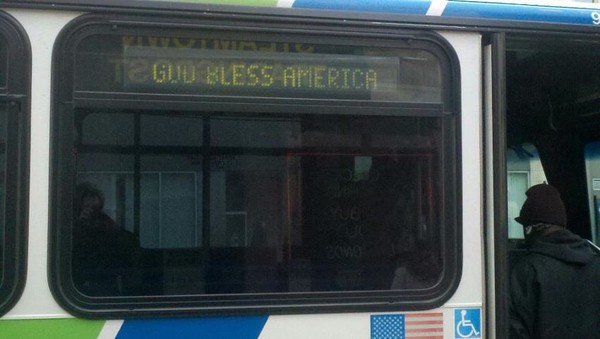 So religion is clearly not a problem for them.

… all restrictions on advertising and any concerns regarding religious advertisements were ignored until NEPA Freethought Society sought to advertise, and the ad space on COLTS had been historically available to all speakers. Indeed, for at least a decade before January 2012, COLTS had never rejected any advertisement.

This was all part of a lawsuit filed last April by the NEPA Freethought Society against COLTS, with the help of the ACLU of Pennsylvania.

Basically, the NEPA Freethought Society wants to run the original ad that included the word “atheist”:

In June, COLTS filed a motion to dismiss the lawsuit, saying they didn’t do anything wrong.

In response to that motion, the NEPA Freethought Society asked for the lawsuit to proceed:

[ACLU attorney Monica Clarke] Platt contends COLTS has not met the legal standard to qualify as a limited public forum. Even if it did, the society has evidence that COLTS accepted ads from several churches, which clearly shows its policy is not viewpoint neutral, she said.

This all “suggests COLTS was not truly interested in banning all words (that) reference to the existence or non existence of a deity; rather it was interested in excluding one side of that debate,” Ms. Platt said.

Ms. Platt also disputes COLTS claims that it can restrict speech because its primary purpose in accepting ads is to generate revenue. She contends the agency cannot show that the acceptance of any religious ad would impact its revenue.

“The exclusion of ads that discuss or refer to religion … has nothing at all to do with maximizing revenue. A church’s dollar is as green as a roofer’s,” she said.

I’m happy to say that the lawsuit will proceed. Yesterday, U.S. District Judge Malachy E. Mannion ruled that COLTS had no legal argument to dismiss the motion.

This isn’t a victory for anyone yet, but it means the case will be decided on its merits. That’s how this should play out — and it works to Justin’s advantage since the law seems to be on his side.

It’s disappointing atheists have to jump through this many hoops to get the same sort of treatment religious people get automatically, but I’m glad the fight will continue.

(via Justin Vacula. Large portions of this article were posted earlier.)

January 28, 2016
Richard Dawkins Responds After Being Booted from NECSS Conference
Next Post