For years now, there’s been a sign outside the post office in Pittsburg, Kansas reading “God Bless America.” 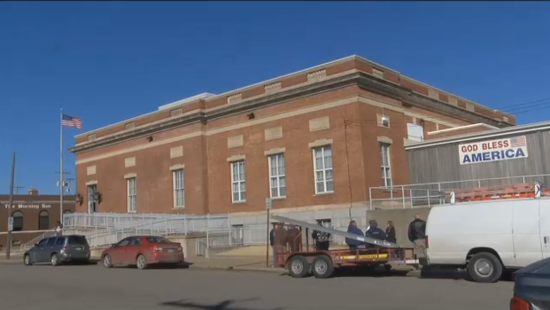 While that’s perfectly fine outside someone’s home, there’s no reason the post office should be endorsing religion. (And to everyone who thinks this is completely harmless, I doubt they’d be saying the same thing if the sign said “God Doesn’t Bless America.” It’s easy to claim it’s harmless when it matches your beliefs.)

The Freedom From Religion Foundation asked the post office to take down the sign at the request of a local resident, and they finally did that. But not before people complained:

Former Postmaster Ed Hinde says “It’s sad, it’s sad that they feel like that this is something that they understand when they don’t.”

Madeline Ziegler with FFRF says “Employees are free to ask God to bless America all they want on their own time. The problem comes when they ask their government employer to endorse their personal religious beliefs by plastering them on the side of the federal building.”

Hinde argues “No, take a dollar bill out of your pocket you’re gonna see ‘In God We Trust.’”

According to postal policy local post offices aren’t allowed to put up non-governmental displays or notices on postal property unless they are approved by U.S. Postal Service beforehand.

Hinde’s entire argument boils down to, “I’M IN THE MAJORITY SO GIMME WHAT I WANT!”

FFRF understands the law perfectly well. Just because the sign has sentimental value for some people is irrelevant — they should have thought about that before they put up the sign. They’ll still allowed to post the sign on their own property. No one will stop them.

But this sort of argument is rarely about personal expression. It’s always about shoving religion in everyone else’s face.

January 28, 2016
We May Very Well Have a Presidential Election Between Two "Nones"
Next Post

January 28, 2016 Why Would a Nurse Ever Say This to a Patient?
Browse Our Archives
What Are Your Thoughts?leave a comment