Christian Activist: Parents Would Rather Their Kids Be Addicted to Drugs Than Be Gay January 28, 2016 Rachel Ford

Christian Activist: Parents Would Rather Their Kids Be Addicted to Drugs Than Be Gay

“Coach” Dave Daubenmire is a speaker whose ministry focuses on firing up Christians to win the “culture wars” through heavy use of sports metaphors. His website explains that, after winning a case against the “ACLU in the late 1990’s for mixing prayer with his coaching,”

Coach heard the call to move out of coaching a high school team, to the job of coaching God’s team. PASS THE SALT was formed to encourage the Body of Christ to step into the cultural war. “For we wrestle not against flesh and blood…” PASS THE SALT is convinced that God has given the Body a window of opportunity to take our culture back.

When the coach isn’t worried about staged terror attacks designed to take away Americans’ guns; when he’s not blaming victims of anti-abortion violence for being attacked; when he’s not yearning for “some militant, violent, Christian Donald Trumps” on the political right; he’s got plenty to say about gay people. 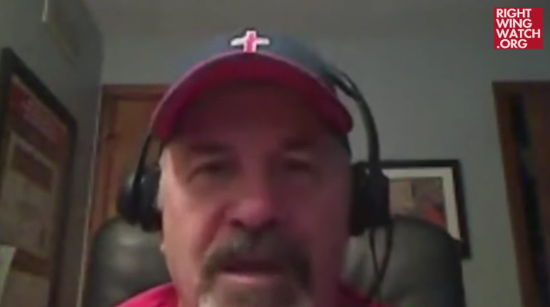 The same goes for self-styled culture warrior Mike Heath, who has spent time as the head of the Maine Family Policy Council, as well as heading the

… state chapter of the American Family Association, before announcing a short-lived bid for governor. Not long thereafter, Heath turned up in Iowa, working as state director of Ron Paul’s presidential campaign, before returning to Maine to run something called Helping Hands Ministries.

He has a lot of concerns about gay people. And, for the record, he staunchly opposes “the export of sodomy to other worlds — to the entire universe!” Because this was something he actually addressed last year.

At any rate, Daubenmire and Heath decided to produce a series of daily videos available online, and their inaugural program on Monday featured another stalwart truth teller: Peter LaBarbera, from the group Americans for Truth About Homosexuality. (Any guesses as to the focus of their group?)

So what kind of enlightening truths did the team reveal?

Said LaBarbera: “You’re absolute right, Coach. Nobody is saying, ‘Wow, I’m so glad I have a homosexual son.'”

It’s bad enough that these guys are discussing that a serious and potentially tragic problem like addiction would be preferable to something as simple and non-threatening as a child being attracted to people of the same gender. The fact that they assume their twisted perception extends to everyone else is even more bizarre.

Hate to break it to you, “Coach,” but there’s not much that would prompt normal, sane, loving people to wish that a child — theirs or any one else’s — would just struggle with the devastating pull of addiction. Especially when the alternative is something as harmless as a same-sex relationship.

January 28, 2016
After Putting "In God We Trust" on Vehicles, Virginia Sheriff Brags About Weekly Office Bible Study
Next Post