With Help from the “Body of Christ,” Ted Cruz Says He Will Bring America “Back from the Abyss” January 27, 2016 Rachel Ford

With Help from the “Body of Christ,” Ted Cruz Says He Will Bring America “Back from the Abyss”

I’ve often thought that Sen. Ted Cruz exudes a kind of smarminess better suited to an ethically challenged salesman than a legislator (much less president). It’s rarely so prominent, though, as when he’s discussing God’s divine plan for America, and how that involves electing him president.

His recent interview on Christian Broadcast Network’s The Brody File is a perfect example of what I’m talking about. 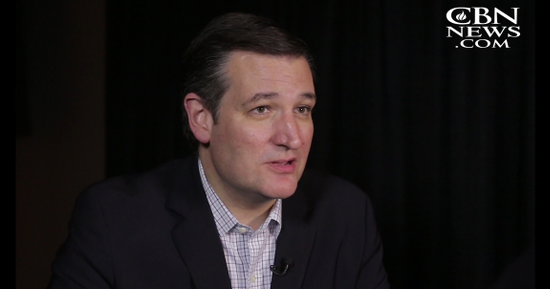 Cruz is explaining how he believes he will win Iowa — with grassroots support — when he takes a swipe at people who think they’ll make America great. “You know what?” he asks. “For seven years we’ve had a president in the White House who has had a Messiah complex.”

Interviewer David Brody notes that he’s making a swipe at Donald Trump with that comment, and Cruz responds by pretending he wasn’t saying what he clearly was.

So far, typical rhetoric. But then, rather abruptly, he shape-shifts from Senator Cruz to Reverend Ted. And while you get the sound bite below, the words pale in comparison to the full picture you get when his vocal tone and facial expressions are taken into account:

And, you know, one of the amazing things David — we have a prayer team of people all across the country that are lifting the country up in prayer, and every day as I travel Iowa, I ask the people here to stand on the promises of Second Chronicles 7:14, to lift this country up in prayer. There is an awakening, there is a spirit of revival that I see everyday, it’s sweeping this country.

And David — I fear for America. If we keep on this path, there comes a point of no return. And my prayer is that this awakening continue, that the Body of Christ rise up to pull us back from the abyss. And it is the most humbling and amazing experience. You know people ask on the campaign trail, they say, you know, “Ted are you tired?” And listen, this is 6 days a week, it’s 16, 18 hours a day. It is physically tiring. But I am energized and I am invigorated because I see people across the country — you and I are going to go into the other room and visit with pastors who are passionate to turn this country around. And I listen to people every day who are so desperate “please help us save this country!”

You see, it’s not about Cruz at all. It’s about saving the country. It’s about pulling America back from the abyss.

It just so happens that Ted Cruz is the only one who can do that. According to Ted Cruz (who obviously speaks on behalf of God.)

That’s why we’re doing it, and I am convinced God is not done with America. We are going to, together, with God’s blessings and grace, pull America back from the abyss. And it’s this election that makes the difference.

This election isn’t about Ted Cruz. Oh, you should cast your vote for Ted Cruz, but remember that you’re doing it for God.