Tomorrow night, just before an apparently Donald Trump-less Republican debate, several atheists in Iowa will be participating in a protest in defense of church/state separation.

The theme of the event? “Keep Your Theocracy Out of Our Democracy” 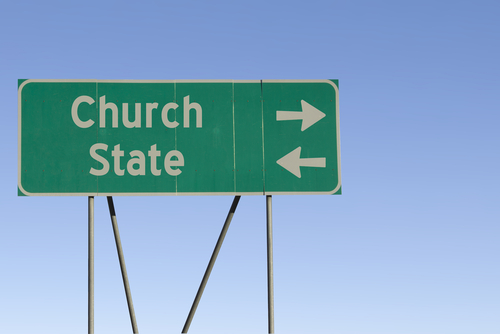 “The point of our demonstration is that we represent the fastest growing minority yet we are ignored by the candidates” explained Rory Moe, coordinator for the Central Iowa Coalition of Reason. “According to the Pew Research Center’s May 12, 2015 study, adults that identify with no religion has grown to 23% over the past seven years. This number rises to more than a third of those 33 years old and younger. There are more of us than either Roman Catholics or mainline Protestants and are second only to evangelical Protestants. Of the religiously unaffiliated, 31% are atheist or agnostic-well over 17 million voters. We will be silent no longer and deserve to be appropriately recognized in the democratic process, rather than being relegated to the fringe of campaign targeting.”

If you’d like to join them, more information can be found here. They’ll have signs that say #AtheistVoter.

You can’t miss them. Just look for the group of people all the Republicans are avoiding.