In a recent episode of Christian pseudo-historian David Barton‘s show “Foundations of Freedom,” he spoke with (former) Rep. Michele Bachmann about the famous lawgivers, including Moses, whose images are found in the House chambers.

That’s when Bachmann explained how the Bible trumps the Constitution. If Congress passes laws that contradict what the Bible says, she said, it “degrades” the nation: 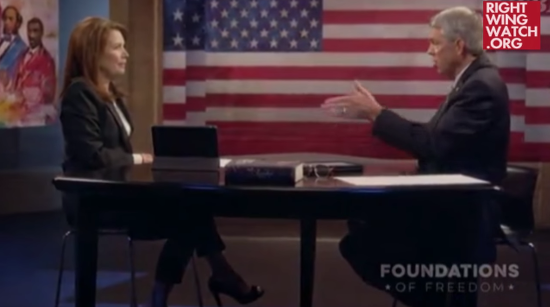 It’s always convenient when God’s moral law just happens to coincide with your personal interpretation of the Bible, isn’t it? You’ll never hear a religious conservative saying, “I would love to support this bill, but God says I can’t.”

It’s also telling which laws conservatives ignore. Is stoning adulterers okay? What about eating shellfish? Can we get tattoos? They pick and choose which biblical laws to follow.

The beauty of our legal system is that we can, in theory, change it when we realize it’s wrong. If a law is unjust or ineffective, we can revise it. We can write new laws that supersede the old ones. Biblical law isn’t subject to change. Conservatives see that as a strength, even though that’s its biggest weakness.

January 26, 2016
Rapper B.o.B. Says the World is Flat and He's Got the Evidence to Prove It
Next Post

January 26, 2016 Satanists' Lawsuit to Fight Missouri's 72-Hour Abortion Waiting Period Hits a Bump but Rolls On
Browse Our Archives
What Are Your Thoughts?leave a comment