Gary Cass of the Christian Anti-Defamation Commission (we’ll get back to that in a second) wants to remind his followers of what they ought to look for in a President. A strong resume? The ability to reach across the aisle?

None of that matters.

Cass only wants to know two things about you before he votes: Are you Christian? And do you have a penis? 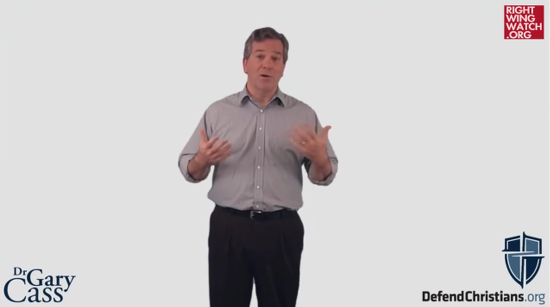 What should be look for in our elected officials?… The first qualification is they must be a Christian… What a candidate professes about God is absolutely critical. It will profoundly shape his leadership. Genuine reverence for the Lord is the foundation of knowledge… So we need a leader who is alive spiritually and who will lead in the fear of God.

The biblical biological requirement for office is you must be male. Civil leadership should be conceived of as an extension of the family and God’s created order. God established man as the head of the woman and woman as his helpmate… In society, the same roles apply as is ordained in the family and in the church.

The ministry of justice that God has given to the state is generally a man’s job. Yet, there are exceptions in the Bible where God has raised up women like Deborah to judge and even deliver Israel. But it’s considered an indictment when there’s no strong, godly men to lead and protect their families and society.

Ability and character also matter, Cass says, but not unless those first two requirements are met. If you bring honesty into the fold, good luck finding anyone.

Cass, by the way, has said that President Obama is not a Christian, that owning a gun is mandatory for all Christians, and that gay people are “spiritually worthless.”

But remember: It’s Christians in the majority who have it so rough that an anti-defamation group is needed to defend them.

January 25, 2016
A Compilation of Atheists Talking About Islam
Next Post