If you know anything about basketball, it might be that the Golden State Warriors, led by last year’s MVP Steph Curry, is by far the most dominant team in the league right now. They won the NBA championship last year and they’re well on their way to repeating this year.

Head coach Steve Kerr and his assistant Luke Walton, who took over while Kerr was on medical leave this year, have been incredible. They’ve turned the team from one you rarely thought about to one you can’t stop watching.

Kerr got the coaching gig last year after the team’s management fired his predecessor Mark Jackson. So it’s worth asking: Does the team’s success now suggest that Jackson was a bad coach?

Earlier this month, that question was posed to Boston Globe columnist Bob Ryan on the Dan Le Batard Show, and Ryan was extremely blunt with his answer, reflecting on what he was thinking two years earlier: 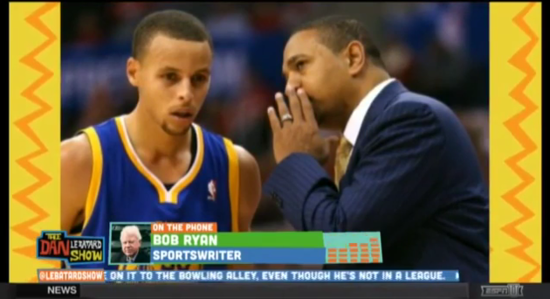 … [The Warriors are] doing okay, but I know they can do better. I know if they had a real coach, not some phony, Bible-pounding phony that Mark Jackson is, you know, when he isn’t even a legitimate Bible-pounder, I’m telling you, I know they’ll be better off…

[Dan Le Batard: I mean, Bob, that was savage, what you just did. A “legitimate Bible pounder”?]

Yeah, because he’s a phony. That’s all. Well, I’m sorry, but it’s the truth. And I can’t believe they took him back on that broadcast. Oh my God. He’s a con man, and he’s done very well at it. I’ll give him credit for being a great one.

Some context for those remarks: Jackson is a church pastor who often preached on the sidewalks. (He’s one of those types.) But at the same time, he was in the news after his stripper-mistress tried to extort money from him using a dick pic that he sent her.

So maybe his comments weren’t all that off-base. But because he punched below the belt, ESPN apparently suspended Bob Ryan from television appearances on their network for most of this month. He finally returned yesterday, telling The Big Lead:

… it was an “intemperate, foolish outburst that I regret. I was treated very nicely by the company, and have told them that I will not do anything like this again to be out of their good graces.”

The apology isn’t surprising. The weeks-long suspension wasn’t for criticizing Jackson’s abilities as a coach, but for bringing his faith into it and turning it into a personal attack. I have no problem with him being temporarily punished for that.

There’s an important lesson to be learned here: If you’re an ESPN commentator and you want to mock someone’s faith, just do it in a passive-aggressive way and everything will be just fine.

(via Deadspin. Thanks to Justin for the link)

January 25, 2016
This is What the "Be Like Bill" Meme Would Say for Various Religious Figures
Next Post