As you know by now, Donald Trump told a crowd yesterday that, according to some of his followers, he’s so invincible right now that he “could stand in the middle of Fifth Avenue and shoot somebody, and [he] wouldn’t lose any voters, OK?… It’s, like, incredible.”

It makes you wonder how devoid of morals his supporters are that they wouldn’t flinch in their support of him even if Trump turned out to be a murderer.

Some Christians they are. The only thing that would have made the speech better is if Trump followed up his shooting comment with one about how much he loves the Bible. 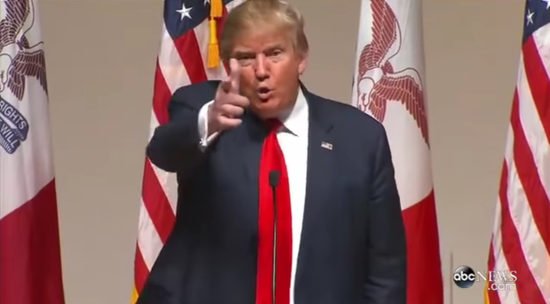 There are words to describe people who don’t change their mind no matter what the facts are: Stubborn. Dogmatic. Irrational.

None of those scream “I’m intelligent enough to think for myself.”

But think about this for a moment: If those hypothetical people Trump was shooting at decided to shoot back, we’d be that much closer to a President Sarah Palin.